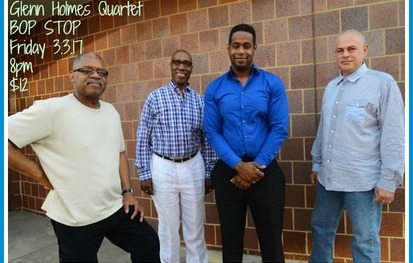 The Glenn Holmes Quartet is one of the most in demand jazz quartets in Cleveland. They are also an ensemble in residence at The Music Settlement. These guys write incredible original music and arrangements of standards. If you like to swing, you do not want to miss this show!

Drene Ivy, Piano
Drene Ivy began playing the piano at the age of four. By the time he was eight years old he was skillfully playing classical compositions by Beethoven. He studied piano techniques, and theory at The Cleveland Music School Settlement, and studied classical music at the Cleveland Institute of Music. Drene has worked as an instructor of jazz composition, techniques, and piano theory for the Houston Board of Education as well as an instructor of Jazz History at Cleveland State University, in Cleveland, Ohio.

Drene appeared as guest clinician at the famed Edwin Hawkins and Walter Hawkins Music and Arts Seminar where he served as staff clinician teaching keyboard performance. As a composer Drene has written, and recorded “Lift The Savior Up”, with the Music and Arts Seminar Choir, and has also played with Grammy Award winning saxophonist, Kirk Whalum and many others.

Johnny Cochran, Sax
Johnny Cochran is a saxophonist from Cleveland, Ohio. As he aimed to share his life story through music, Johnny participated in gospel music, played drums in his church, and sang in the choir as a budding talent. Attending the Cleveland School of The Arts, and Cuyahoga Community College in Cleveland, Ohio, he studied saxophone simultaneously with the legend, Ernie Krivda, and has been mentored by of a number of Cleveland’s finest musicians.

Since furthering his training at the prestigious Oberlin Conservatory of Music, Johnny has performed with Mojo: The Generations Big Band, The Jazz Heritage Orchestra, Ernie Krivda’s Fat Tuesday Big Band, and The Swing City Band. He has performed with world renowned artists, Clark Terry, Jimmy Heath also. Under the direction of Warren, Ohio trumpeter, Sean Jones, Johnny is currently a member of the Cleveland Jazz Orchestra, has studied with Gary Bartz, and is a 2013 graduate of the Oberlin Conservatory of Music. In addition to playing the saxophones, Johnny is proficient on piano, drums, and various woodwind instruments.

Paul Samuels, Drums
Paul Samuels grew up Cleveland Heights, Ohio. His father was a violinist with The Cleveland Orchestra, and his mother a designer, and creator visual art. As parents they both were very supportive of Samuels’ interest in music. As a teen, Paul with his father attended many concerts featuring McCoy Tyner, Tony Williams, Duke Ellington, Dizzy Gillespie, and Sarah Vaughan. These jazz innovators inspired the young Samuels to become a musician, drummer, and performing artists.