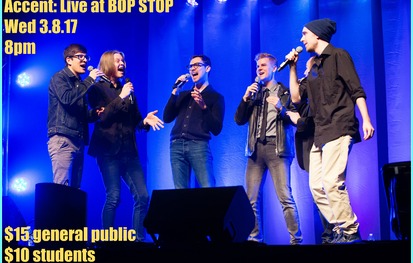 A shared love of close harmony and vocal groups brings the members of Accent together across oceans and country borders. Though their repertoire runs the gamut of standards, rock, pop and spirituals, the “Accent sound” is entirely their own. In addition to offering their spin on recognizable songs, they’re also proud to debut songs from their new EP, In This Together.

Accent began in 2011 as a one-time internet collaboration among a cappella vocalists from 5 different countries. These musicians had stumbled upon each other on YouTube through a common love for close harmony vocal groups of the 20th century. Eventually, they decided to produce a collaborative video from their respective homes. Following that first project, the group continued to work together, communicating solely through Facebook and e-mail. In 2014, the group was invited to meet and perform live for the very first time in Sweden. After a rousing success, the members have continued to perform live and released their debut EP entitled Here We Are in 2015. Accent is truly a success story of the modern age.