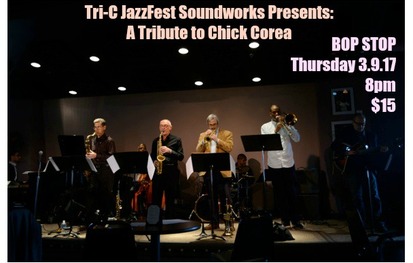 SoundWorks was founded by Tri-C JazzFest in 2009 to be a resident ensemble of JazzFest with a working collective of Northeast Ohio musicians showcasing their skills as composers, arrangers and performers. Since 2009, SoundWorks has re-imagined the works of legendary artists such as McCoy Tyner, Dexter Gordon, Miles Davis, John Coltrane, Jim Hall and The Liberation Music Orchestra with Charlie Haden.

While the presentation of repertoire material is part of the vision, there has always been an emphasis on presenting the new music and/or arrangements by member of SoundWorks. The following is a chronological look at our past JazzFest performances:

TCJF SoundWorks will be reprising it's 2016 Tri-JazzFest tribute to one of this year's featured artists, Chick Corea. Corea is one of the most innovative jazz pianist/composer of the past 50 years and, at 75 years of age, continues to maintain a very active performance schedule. Corea was at the forefront of the jazz fusion movement as a member of Miles Davis's band in the late 1960's and has won 22 Grammy awards for his recordings as a leader of various fusion and acoustic ensembles.
SoundWorks will perform arrangements of Chick Corea compositions including:

Members of the band include: