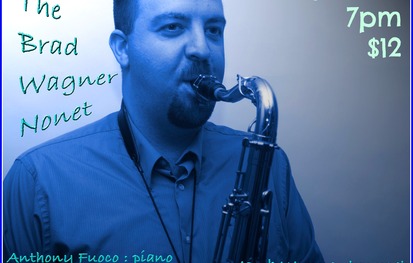 A new 9 piece group led by saxophonist and composer Brad Wagner performs their debut show at BOP STOP! Featuring a number of originals by Brad, this group’s purpose is to share original music, and new arrangements of some of Brad's favorite songs from the jazz world and beyond, with a fresh sound performed by an exciting group. The Nonet is comprised of some of Brad’s favorite local musicians that Brad feels share his musical tastes and intentions of reaching audiences souls and minds with the music.

This concert celebrates not only the debut performance of the group, but it is also Brad’s birthday!

Brad Wagner is a saxophonist, clarinetist, composer, and arranger who can regularly be seen performing with Moustache Yourself, The Cleveland Jazz Orchestra, Ernie Krivda and the Fat Tuesday Big Band, The Sam Blakeslee Large Group, The Black Dog Octet, The Signal Ensemble, Red Rhinoceros, The ABC Trio, and others.