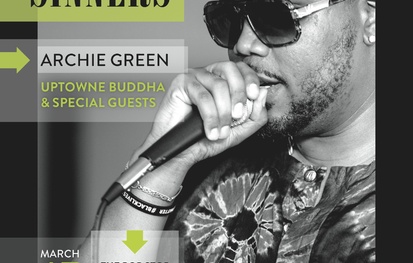 Archie Green is CLASS. The Cleveland born and bred producer/MC developed an affinity for music at an early age. Archie started rhyming when he was thirteen finding inspiration from the likes of Jay-Z, The Notorious B.I.G., Kanye West and Lupe Fiasco. Under his previous pseudonym, SoulKlap, Archie began building an independent career through production efforts as well as efforts behind the mic. Some of his credits include a feature on the 2010 Talib Kweli hosted Year of the Blacksmith Community Mixtape; two features on Bronx MC MaG's new release, freedom.; production credits with mixtape DJs Mick Boogie & Terry Urban, Converse & the new VICE-sponsored viral show, NOISEY RAPS. In the past, Archie has opened for a number of well respected hip-hop performers including B.o.B. as well as Wiz Khalifa. Archie's sound can be classified under progressive hip-hop, with a jazz-influenced aesthetic.

Uptowne Buddha, is bound to move you. This dynamic and diverse live instrument hip-hop group seamlessly crosses boundaries between the languages of neo-soul, hip-hop, the jam scene, and the emerging sounds of the future.