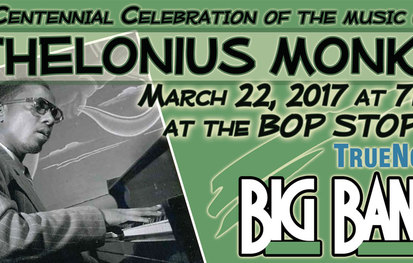 Now celebrating our fifth year, the TrueNorth Big Band has become one of the most swingin' bands in Northeast Ohio! This 18 piece band performs concerts, private events and many swing dances on the east and west side of Cleveland.

Musical Director Eric Dregne has been playing in and leading big bands for over 25 years. A typical TrueNorth Big Band performance includes some standard big band classics from Glenn Miller, Artie Shaw and Woody Herman. You'll hear some iconic rock tunes as well as funk and latin music mixed in for extra flavor.

In 2015 and 2016, the band did a full re-play of the classic album Sinatra At The Sands that featured Ol Blue Eyes back up by the legendary Count Basie Orchestra. In 2017 the band starts off the year with performances to celebrate the music Thelonious Monk who was born in 1917.

Come join us for great music some of the best players in Cleveland!