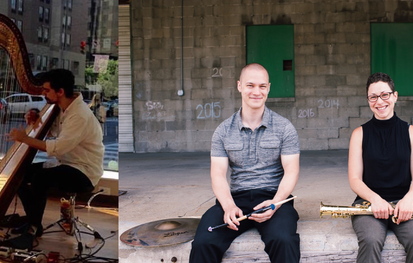 This performance is part of the 4th annual NEOSonicFest, presented by Cleveland Chamber Symphony.

Stephan Haluska is a harpist, composer, and improviser based in Cleveland, OH. He creates abstract compositions for harp exploring its idiomatic textural, harmonic, and percussive qualities. The harp has developed quite the mystical identity in western culture as the sound of angels in heaven, magic, and dream sequences. In his music, Stephan both plays with and challenges these stereotypes, in attempt to (de)mystify the harp.

Stephan will play a collection of original pieces with various degrees of improvisation. This music will be featured on his forthcoming release.

Patchwork, is a Cleveland-based saxophone and drum set duo that collaborates with composers to build an eclectic body of new music. Since forming the group in 2013, Noa Even and Stephen Klunk have commissioned over a dozen works. Patchwork has performed on many college campuses, often combine performances with educational events such as composer readings, master classes, and presentations. Their recent tours include shows at Constellation in Chicago, Spectrum in New York City, Omaha Under the Radar.

Patchwork‘s program features a broad mix of commissioned works for saxophone and drum set. Like most of Charlie Wilmoth’s music, Fractured Laundry feels mechanical, but if it’s a machine, it’s one that cannot be easily controlled. Huijuan Ling’s Shadow Phase creates a musical narrative inspired by a visit to Devil’s Canyon in Utah and reflects the processes that carved the canyon into the surrounding landscape. Breathe, by Evan Williams, concentrates on quiet, yet rhythmically active gestures to explore the complexity of human breath, at times quiet and relaxed, and at other times, loud and labored. Vermilion was influenced by Jonn Sokol’s interactions with various Shinto Shrines while visiting Kyoto, Japan. Eric Wubbels’ Axamer Folio is a modular network of 25 pieces that range in performative and notational contexts, from rigorously specified to indeterminate, graphic, and text scores; from tightly synchronized duo music to phasing loops, list structures, and free improvisation.