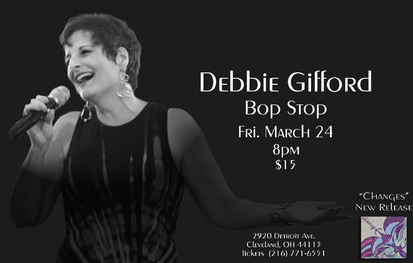 What does Opera & Jazz have in common? The answer is DEBBIE GIFFORD. Most people find this marriage of Opera & Jazz unconventional but Debbie has created a style unlike any singer before her – a match made in heaven. She captivates audiences around the world with her unique vocal abilities and irresistible charm! Earning a Master’s Degree in Opera and embracing a passion for jazz - Debbie has united these two musical genres to create a sound that is exclusive to her alone…

“Gifford’s voice is both smooth and engulfing, wrapping itself around every note and mesmerizing the listener with subtle charm”. “Her sensual style of phrasing and timing are the very essence of her creativity. Debbie is spellbinding - she holds the audience in the palm of her hand”

Gifford performs in the USA, Europe & Asia and has shared with stage with jazz greats: Marcus Belgrave, Bobby Watcon, Joe Lovano, Dominick Farinacci and Guiseppe Campisi and was the first woman singer to perform with the Birdland Big Band, under musical director of Tommy Igoe at Birdland Jazz Club, NYC. She travels and performs exclusively with pianist/arranger/ composer John Trzcinski.

”No woman ever became great by imitation. Debbie Gifford was unique in her spectacular show at Birdland. A rare treasure that dazzled the audience with her one of a kind show that night."

Discography includes: “You Taught My Heart to Sing”, “So Many Songs About Love”, Double Live CD set “Open Airs” recorded in France , "One Day At A Time" - all original music written by songwriting team Debbie Gifford & John Trzcinski. One Day At A Time’s music track "Little Girl Waltz" was acquired by Cat Studios (France) as a movie soundtrack.

Debbie Gifford & John Trzcinski’s newest CD Release “Changes” will begin worldwide concert tours in 2017 and will be available at the Bop Stop during the performance.