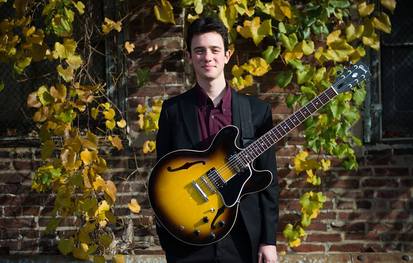 Jake Kelberman is a graduate of the Jazz Studies program at Temple University's Boyer College of Music, where he studied under musicians including Terell Stafford, Dick Oatts, Greg Kettinger, Bruce Barth, and Ben Schacter. He has performed throughout the United States and Europe at venues such as Dizzy’s Club Coca Cola at Lincoln Center in New York, The Kimmel Center in Philadelphia, and the Bimhuis in Amsterdam, Netherlands. Jake won second prize at the Wilson Center Guitar Competition in Milwaukee in 2016, and was a finalist in the "Keep and Eye" Jazz Competition in Amsterdam, NL in both 2013 and 2014. He has had the privilege of performing with artists including Jim Snidero, Gerald Veasley, Walt Weiskopf, Deana Martin, Mike Boone, Justin Faulkner, John Swana, Arturo Stable, and Chelsea Reed and the Fair Weather Five.

For his show at the BOP STOP the quintet will perform original music composed by individuals in the band.

The personnel will be: