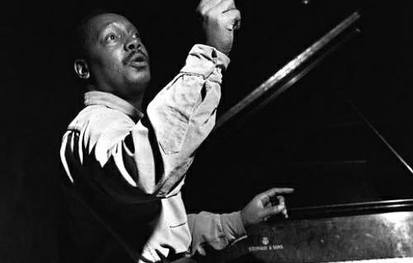 For their show at BOP STOP, East Central Jazz Educators All Star Big Band will be performing Tadd Dameron's, The Magic Touch. The band is co-directed by Steve Enos adnd Kent Engelhardt and comprised of incredible musicians and educators including:

Student tickets are $15 at the door.

In the history of jazz, composers and arrangers have played a significant role in both small groups and big bands. This is certainly the case with Tadd Dameron, considered by many to be one of the most important jazz composers. His work with the Dizzy Gillespie Orchestra and with his own small groups and big bands are well known. However, very little of his music is commercialy available today, especially the music from The Magic Touch, his last recording project as a leader. Even though some of the pieces were published by Bregman, Vocco, and Conn for the “educational market for big-band jazz, which was still relatively new,” they are now out of print. The recording of The Magic Touch, with a band consisting of jazz stars, took place on February 27, March 9, and April 16, 1962. Ten pieces were recorded including Dameron’s originals “On A Misty Night,” “Fontainbleau,” “Just Plain Talkin’,” “If You Could See Me Now,” “Our Delight,” “Dial B For Beauty,” “Look, Stop And Listen,” “Bevan’s Birthday,” and “Swift As The Wind,” as well as a collabortion with lyricist Bernie Hanighen titled “You’re A Joy.”

Tadley Ewing Peake Dameron was born on February 17, 1917 in Cleveland, Ohio, and is known as a composer, arranger, bandleader, and pianist. In addition to composing for his own groups, Dameron wrote for Jimmie Lunceford, Count Basie, Coleman Hawkins, Benny Goodman, Sarah Vaughn, Dizzy Gillespie, and Ted Heath. In 1958, in the middle of his career, Dameron was arrested and subsequently sentenced to five years imprisonment on federal drug charges. He served most of his sentence at the U.S. Public Helath Service Hospital in Lexington, Kentucky, where he took part in a drug rehabilitation program. While in the Hospital, Dameron had the opportunity to perform with, and write for, a big band that existed there. According to Joe Goldberg, who wrote the liner notes for The Magic Touch, five pieces for the album were “composed in the Federal Hospital at Lexington Kentucky….” Dameron was released from the Hospital in 1961, one year early, and he resumed composing for his own projects and wrote “scores for recordings by Milt Jackson, Sonny Stitt, and Blue Mitchell.” Toward the end of 1962, Dameron began to experience serious health problems that would plague him for the rest of his life. He suffered with a heart ailment, and later developed cancer. He died on March 8, 1965 in New York at age forty-eight.