Debbie Gifford: Tis The Season To Be Jazzy @ BOP STOP 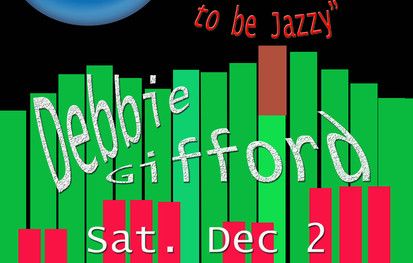 Debbie Gifford: Tis The Season To Be Jazzy @ BOP STOP

Debbie Gifford – “Tis the Season to be Jazzy”

Internationally renowned Jazz Vocalist Debbie Gifford returns with her fabulous Trio to the BOP STOP stage with Seasonal Gems along with a mix of Latin, Swing, Ballads and Funk!

What does Opera & Jazz have in common? The answer is DEBBIE GIFFORD. Most people find this marriage of Opera & Jazz unconventional but Debbie has created a style unlike any singer before her – a match made in heaven. Gifford captivates audiences around the world with her impeccable vocal abilities and irresistible charm! Earning a Master’s Degree in Opera and embracing a passion for jazz - Debbie has united these two musical genres to create a sound that is exclusive to her alone…

Debbie Gifford has been nominated “Jazz Musician of the Year, “Jazz Band of the Year”, and “Vocalist of the Year” in the Annual Free Times Music Awards. Worldwide performances include: USA, Europe & Asia and has shared the stage with jazz greats: Marcus Belgrave, Bobby Watson, Joe Lovano, and Dominick Farinacci. She is the only woman singer to perform with the Birdland Big Band, under the director of Tommy Igoe, at the famous Birdland Jazz Club, NYC.

John Trzcinski: Pianist, Composer, and Arranger John Trzcinski has been a prominent figure in the Ohio music scene for over 35 years. John has completed extensive work in recording studio’s arranging and composing for jazz, pop and classic rock groups including the Classic rock sensation “The Outsiders”. Trzcinski has accompanied many American superstars of stage and screen in his tenure as pianist. Listed among his performances with the stars are Marvin Hamlisch, Patty Paige, Joan Rivers, Milton Berle, Susan Anton, Lola Falana, David Brenner, Rodney Dangerfield, Henny Youngman and Tennessee Ernie Ford and various international recording artists including jazz vocalists Liz McComb, Geri Brown, and national artists Laura Robinson star of the “All Night Strut” . John appears in many of the top jazz clubs and concert venues in the United States, Asia and Europe.

Chris Vance: Chris has consistently been a prolific performer in both the classical and jazz/rock realms throughout his career. His current projects include guitar work in The Killerwatt Hours, bass work in The Syncopated Sin Swing Band, A duo with Bobby Ferrazza , and the Debbie Gifford Quartet. He has performed with Blue Lunch, Cats on Holiday, Mr. Downchild, Abdou Mboup , Bobby Rydell, Wallace Coleman, Michael Civisca, Abundance, and led a trio that opened for jazz great Joey DeFranceco. He is featured on recordings by Kassaba, Parallets and Cletus Black.

Evan Mitchell: Drummer and Percussionist Evan Mitchell from Cleveland, Ohio attended the Cleveland Institute of Music, where he was a recipient of the Avedis Zildjian Scholarship and was a prize winner in the Darius Milhaud Performance Competition. He studied with Richard Weiner, Paul Yancich, and Marc Damoulakis of The Cleveland Orchestra and World Percussion with Jamey Haddad. As a drummer he’s performed with a number of groups including The FiveOne Experimental Orchestra, The Cleveland Settlement Jazz Orchestra, The MOJO Jazz Orchestra, The Madison Jazz Project, and The Roberto Ocasio Latin Jazz Project

“Gifford’s voice is both smooth and engulfing, wrapping itself around every note and mesmerizing the listener with subtle charm”. - John Benson, Critic & Author, TGIF Entertainment