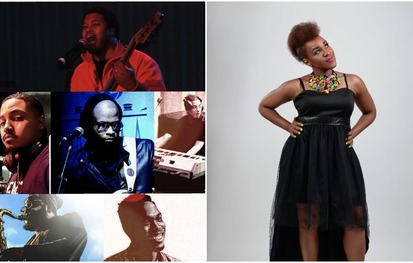 We hope you can join us for a high energy evening as Dr. E joins forces with The Doni Jai Band!

Dr. E is a multi-dimensional personality- author, professor, performance artist, captivating soul singer, songwriter, and more! Spring/summer 2017 marks the release of her new album, “Songs for the Struggle.” As a songwriter, she poetically delivers her own experiences in a genre-melding set of funk, soul, rock, and r&b.

As a vocalist, Dr. E evokes the tone and feel of Betty Wright and a Bluebelles-era Patti LaBelle. Her eclectic musical influences have evolved into her own style hallmarked by a mixture of bluesy melodies, vulnerable sighs and vibrant vocals. Her 2010 debut CD Elevated, earned her a nomination for best new artist by soultracks.com. Expect to be elevated by a funky night with The Inspirational Soul Queen!

Led by multi-instrumentalist/composer Doni Jai, the group features some of the best musicians from the Midwest, who pride themselves on giving a non-stop, breath taking musical experience. The group’s versatility has allowed its members to tour all over the globe netting performances across South Africa, Japan, Russia, Brazil, Italy, France, and more. Doni himself has performed in more than 90 countries while serving as musical director for K’naan during the 2010 World Cup Trophy Tour and has also garnered numerous TV and web appearances including Austin City Limits, Late Night with Jimmy Kimmel, the Tonight Show, and countless others. The group shares a unified vision of spreading love and peace and a bit of a good time through the gift of music. The band consists of: