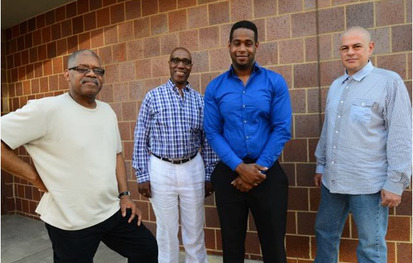 The Glenn Holmes Quartet is one of the most in demand jazz quartets in Cleveland. The band presents incredible original music and outstanding arrangements of standards.

Johnny Cochran, Saxophone: Johnny was a music lover at an early age – as a child, he was active in gospel music, playing drums and singing in the choir in church. He began playing saxophone in elementary school, which opened the door for learning about jazz. He attended Cleveland School of the Arts and Cuyahoga Community College simultaneously during high school, studying saxophone with legendry Ernie Krivda. He graduated from Oberlin Conservatory of Music in 2013. He has performed with world-renowned artists such as Clark Terry, Jimmy Heath, and many others. In addition, he has performed with high-energy ensembles, including Mojo: The Generations Big Band, Jazz Heritage Orchestra, Erine Krivda's Fat Tuesday Big Band, and Swing City Big Band. He is currently a member of the Cleveland Jazz Orchestra under the direction of Sean Jones.

Drene Ivy, Piano: Drene began playing the piano at age 4 and was skillfully playing classical compositions by Beethoven at age 8. He studied at The Music Settlement, Cleveland Institute of Music. He was a jazz composition and piano theory instructor for the Houston Board of Education as well as an instructor of Jazz History at Cleveland State University. Since 2004, he has appeared as a guest clinician at the famed Edwin Hawkins & Walter Hawkins Music & Arts Seminar, where he served as staff clinician teaching keyboarding performance. Drene has composed over 200 songs; his compositions are comprised of a wide range of genres, including inspirational, gospel, classical, easy listening, jazz and Latin jazz. His composition, Worship the King, was selected and presented at the Gospel Music Workshop of America in Milwaukee, Wisconsin. He composed and recorded Lift the Savior Up with the Music & Arts Seminar choir. Drene also played with GRAMMY award-winning saxophonist, Kirk Whalum, and many others.