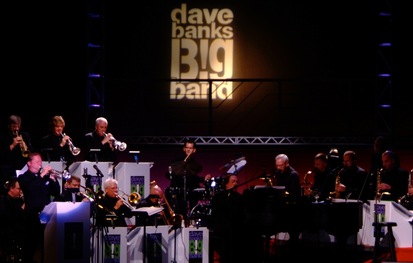 The Dave Banks Big Band: This powerhouse 17 piece swinging big band is based out of Akron, Ohio and is led by Ohio native and 20 year Las Vegas veteran trumpet artist, Dave Banks.The band boasts of having some of the very top players in the Northeast Ohio area.

Trumpeter & bandleader David Banks has returned to the Northeast Ohio area after a twenty-year career in Las Vegas, Nevada. He performed in over 4,000 shows there including numerous top production shows – including six years with the “City Lights” Show at the Flamingo Hilton and the “Moulin Rouge” at the Las Vegas Hilton.

He worked with virtually every major entertainer in show business on the famous Las Vegas Strip and also was a member of the renowned Lou Elias Relief Orchestra. He also found time to perform with the Nevada Symphony Orchestra, The Las Vegas Philharmonic, and the Nevada Chamber Orchestra.

Since his return to the area, David is on the faculty of Walsh Jesuit High School and is in his 15th year teaching music and drama. He is in demand as a lead trumpeter in Northeast Ohio, performing regularly with the Cleveland Jazz Orchestra, having recorded CDs with them as well as CDs for the Paul Ferguson Orchestra and Helen Welch.