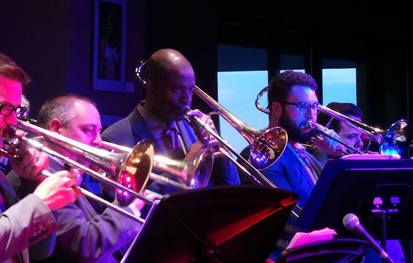 Bone-Afide is a local 8 piece jazz group featuring a front line of 5 trombones backed by a traditional rhythm section. They play a variety of jazz standards with a few originals mixed in. The arrangements for the group highlight the versatility of the trombone; from swing to latin to funk, this group brings an exciting and unique sound and style to the music scene.

The group originated in central Illinois where they recorded their debut album “Main St. Blues”. They’re influenced by JJ Johnson, Kai Winding, and their trombone groups; by all the jazz greats of the past and present; and by the local jazz legends of the Cleveland/Akron area. The current members include: Trombone - Chris Anderson, Max Brady, Scott Marsh, & Jim Redmond; Bass Trombone - Aaron Thornberry; Piano - Stewart Freedman; Bass - Dan Angotti; Drums - Drew Thornberry.

Chris Anderson is the founder of Open Tone Music, which works to make music accessible through world class education programming and performances. Through Open Tone Music he has reached hundreds of youth in the Cleveland and Akron area. After studying music education at Baldwin Wallace University, where he received his Bachelors, he went on to get his Masters degree in music from The University of Akron. In addition to being a successful music educator, Chris composes and performs many different styles of music. He has performed trombone with some of the best in the Classical, Jazz, Gospel, Latin and other musical idioms both in the United States and abroad. He has also displayed success in local and national competitions. You can also hear him featured on several CD’s

Originally from Akron, Ohio, Max Brady is a graduate of the University of Akron where he studied with Ed Zadrozny and Jack Schantz. Max participated in the Jazz Trombone Ensemble while attending the University of Akron, which won the International Trombone Association Kai Winding competition in 2013. The group also performed in Chemnitz, Germany at the Deutsche Musikfest.

Max performs and composes for locally-based soul singer Wesley Bright, and has shared the stage with Tower of Power, Sly and the Family Stone, Lee Fields, Charles Bradley, Mel Brown, and the No BS Brass Band, among others. He has performed at a variety of festivals, such as the Montreal Jazz Festival, the 4th & 4th Fest, and the Nelsonville Music Festival.

Scott Marsh is a Trombonist and Composer/Arranger from the Cleveland, Ohio area. A graduate of Maple Heights High School he has studied with Reginald Fink, Mark Lusk, Chas Baker, Ernie Krivda, and Steve Enos to name a few From 1998-2002 he was a member of the Marine Forces Pacific Band stationed in Kaneohe Bay, Hawai’i. Here he played principle trombone in the Concert, Ceremonial, and Jazz Bands while also being a member of the Brass Quintet and the leader of the Dixieland Band. Scott also served as the Assistant Arranger for the band.

Over the following years he performed with many different groups covering many different styles. Scott is an experienced band leader and conductor as well. He has led all types of ensembles including Chorus, Orchestra, Concert Bands, Jazz Combos, and Funk Bands; he is currently the leader of Bone-afide. He also plays with the Dan Angotti Jazz/Rock Orchestra as a featured soloist and often subs with other area bands including Ernie Krivda and the Fat Tuesday Big Band and AZJazz.

As a Composer/Arranger, Scott is often called upon by High School and College Marching Band Directors. He has arranged for other ensembles as well, to include: Flute Trio, Various Trombone Ensembles (including Bone-afide), Saxophone Quartet, Big Band, Jazz Combo, Chorus, and more.

Cleveland native Jim Redmond grew his passion for trombone early at age 10 was inspired by his father, who also is a local area trombonist. His passion for jazz was inspired not only through family influence; but by listening to jazz trombone greats J.J. Johnson, Carl Fontana, and Frank Rosolino. He also was influenced by studying with major local jazz trombone pros such as Paul Ferguson, Chas Baker, and Chris Anderson. Jimmy has had the pleasure to share the stage with several musical icons including; Aretha Franklin, Jimmy Heath, Nicholas Payton, Conrad Herwig, Jiggs Whigham, Steve Turre, Dominick Farinacci, Ernie Krivda, Bobby Selvaggio & many more.

In addition to playing regularly with Bone-afide, he plays with the Skatch Anderssen Orchestra, the Fat Tuesday Big Band, Jerry Bruno Orchestra, the Dave Banks Big Band, the Dan Zola Orchestra, and Gabriel Horns. He has continued to develop his career and grow his family in the Cleveland area. It is very important to him to continue to deepen his roots in a culture that has had a rich history in jazz.

Aaron Thorberry makes his living in Information Technology, but makes his life in music. The trombone chose Aaron in 5th grade and since then, he has been a dedicated student of the instrument. Aaron is a graduate of The University of Mount Union, where thanks to the liberal arts philosophy; he earned a degree in Computer Science while on a music scholarship. He's been fortunate to perform in Carnegie Hall, The Kennedy Center, The Tri-C Jazz Festival and with notable artists including Howard Johnson and Allen Vizzutti. Aaron stays busy performing with dozens of ensembles of all genres around Ohio including Ernie Krivda's Fat Tuesday Big Band, The Jazz Heritage Orchestra, The Savoy Big Band, The Tuscarawus Philharmonic, The Alliance Symphony Orchestra and The Canton Players Guild.