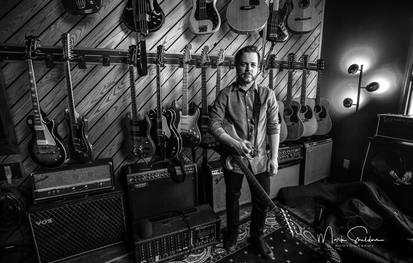 Named Indianapolis' "Best Jazz Musician" of 2015 and 2016 by NUVO Magazine, Charlie Ballantine, is a professional guitarist who performs regularly around the midwest. Charlie has been a featured artist at notable events such as the Penrod Art Festival, The Indianapolis Jazz Festival, The Bloomington Jazz Festival, Fountain Square Music Festival, The Virginia Ave. Folk Fest, and is a frequent performer at renowned jazz clubs such as The Jazz Kitchen, Andy's Jazz Club (Chicago), and The Chatterbox. His music stems from the traditions of folk, jazz, and blues music with influences such as Bill Frisell, John Scofield, Wes Montgomery, and Jimi Hendrix.

Charlie's sophmore album "Providence" was released in May of 2016 and has helped him develop even more of a presence on the national level through reviews from a wide variety of publications (Vintage Guitar Magazine, Absolute Sound, Midwest Record) as well as making it into the top 100 on the jazz radio chart and being played on hundreds of stations worldwide. The highly anticipated third release in three years, "Where Is My Mind?", is scheduled for July 2017.