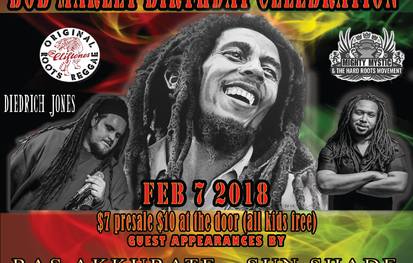 Help us celebrate the Birthday of one of the most influential artists of the last century, Bob Marley, with The Mighty Mystic and Diedrich Jones!

Considered one of the leaders in the U.S Reggae scene, reggae artist Mighty Mystic’s fresh sound and musical diversity have proved to be a magnet for music lovers in search of that next level sound that has been missing in the reggae genre. It has attracted listeners of all ages and from all walks of life. A charismatic man on a mission, Mighty Mystic has gone from being a fan of reggae music to being a contributor to the art. Mighty Mystic came on the scene in 2006 after scoring his first international hit with the song “Riding on the Clouds.” However, it wasn’t until the release of his first album “Wake up the World” (2010) that he became a household name. “Wake up the World” boasted several standouts, such as “Revolution,” “Riding on the Clouds,” “Original Love,” & “Slipped Away” with appearances from reggae icon Shaggy and roots rocker Lutan Fyah. Mystic continues to wake up the world with his high energy, message driven brand of reggae music which he emphatically calls “HARD ROOTS.” It is this unique spin on classic reggae blended with Hip Hop & Rock that has catapulted him to the forefront of today’s Reggae Revival. Mighty Mystic is also the younger brother of current Jamaican Prime Minister Andrew Holness. When asked, does being the brother of Prime Minister Holness have any impact on your music? Mystic simply says “Andrew has a job to do and so do I, impact or not we both have our own mission to complete”.