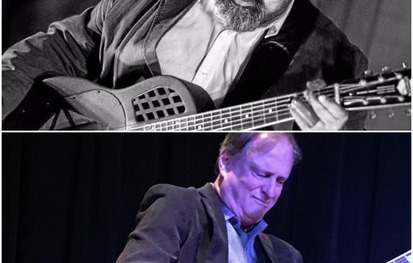 We welcome you to join us for an evening of traditional and original blues from two of Northeast Ohio’s finest practitioners. Bob & Austin will each do a half-hour set of solo material followed by a one hour set playing together.

Bob Frank Bio: Cleveland Magazine said, "Aside from being an accomplished guitarist, Frank boasts a encyclopedic knowledge of old-time country, blues and bluegrass music." The Free Times added, "Frank is a first-class guitarist and vocalist." Jazz and Blues Report added, "A sure-fingered, veteran player, skilled in a wide spectrum of black and white roots styles, Frank comes off as a performer with a strong sense of identity." And in a recent cd review, Vintage Guitar Magazine said, “Frank is a first rate songwriter and a champion guitar player.”

A lifelong resident of Cleveland, Bob spent eighteen years as the leader of the Hotfoot Quartet, touring throughout North America and recording several albums. As a sideman he has worked with Robert Lockwood, Wallace Coleman, fiddler Howard Armstrong, the Falls City Ramblers, and British bluesman Long John Baldry.

Bob has played many different kinds of music including bluegrass, old-timey, swing, rock, reggae and Caribbean soca, but is known these days as an expert in a wide variety of blues styles.

Bob is also one of the founders of the Cleveland Blues Society. He is currently a board member of that organization and serves as the director of the educational committee and the historical committee.

Austin "Walking Cane" Charanghat Bio: Austin Walkin' Cane is a blues singer, songwriter, and slide guitar impressario who performs across acoustic, solo, duo and electric band mediums. He has toured Australia, Colombia, Nepal, France, Germany, England, and Wales. He has also crossed the United States, perhaps most notably from New Orleans, Louisiana to Juneau, Alaska with only a guitar and suitcase in hand.

Austin walked for ten years with a cane due to an arterial venous malformation at birth. While performing on Bourbon Street in New Orleans, a homeless man called out,"Hey Walkin' Cane got some spare change for a brother?!". Austin took the jibe as his nickname. In 1996, after years of battling the inevitable, his left leg was amputated below the knee. A year after the surgery, he returned to the music scene stronger & without need of a cane.

Both Bob & Austin play National resophonic guitars. Austin is a National Guitars endorsing artist and plays two of their newer models. Bob plays a 1931 National Triolian and a 1934 Model O.