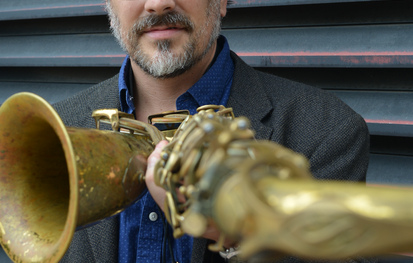 Saxophonist, Tom Tallitsch, returns to Cleveland for a special hometown appearance. This is becoming an annual tradition here at BOP STOP! Tom will be performing standards and originals with his trio.

Tom Tallitsch: Originally from the west side of Cleveland, Tom Tallitsch currently resides in New Jersey. He is a Saxophonist, Composer, Recording Artist, Music Educator, and host of ‘The Modern Jazz Radio Show’. His 8th album as a leader is due out on the Posi-Tone Record label this spring. His albums are on radio playlists around the world and have topped off at #18 on The JazzWeek charts. Tom performs as a leader at jazz clubs in NYC and throughout the east coast, including Smalls Jazz Club, The 55 Bar, Birdland, Blue Note, Minton’s Playhouse, The Sidedoor, Chris’ Jazz Cafe, Arts Council Of Princeton, WhyNot Jazz Room, Cornelia Street Cafe, The Garage, Bar Next Door, Paris Bistro, South Jazz Club, and many more. He regularly tours throughout the United States as a leader and sideman.

Jason Fraticelli: As an upright bassist, composer, and multi-instrumentalist, Jason Fraticelli is seen and heard often at the center of many musical scenes in the Philadelphia/New York communities. For the past 20 years he has been acting as sideman for many different artists such as Matisyahu, Melody Gardot, and Cyro Baptista, while at the same time always fascilitating his own groups such as the Fresh Cut Orchestra, The FCC, and The Jason Fraticelli Band. The Fresh Cut orchestra was recently featured on NPR and celebrated it's recent album release at Dizzys Club Coca Cola at Lincoln Center NYC.

Greg Snyder: Guitarist and composer from Philadelphia. He has performed with Clark Terry, Antonio Hart, Conrad Herwig, Jimmy Heath, and Steve Davis, among others. His current trio often features Trumpet virtuoso John Swana. Some of the venues he has performed at are The Kennedy Center, the Kimmel Center, the Midwest Jazz Clinic, the July 4th Welcome America Festival in Philadelphia, The Iridium, The Bitter End, Musikfest, The Steel Stacks, Mayfair, Believe Fest, the Lincoln Center, the Rainbow Room, the Liacouras Center, the Philadelphia Classical Guitar Society, Allentown Symphony Hall, and many other venues and music festivals in Philadelphia, New York City and the outlying regions. Greg was the guitarist for the second national tour of the musical The Color Purple.