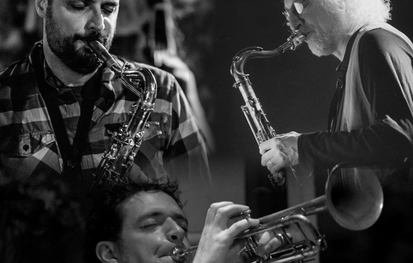 This free-improvising trio came together in the fall of 2011, when Rempis journeyed to the West Coast to discover some things about his compatriots on the Bay Area improving scene. Trumpeter Johnston, a frequent visitor to Chicago, where the two had collaborated in several different settings in the years prior, suggested this trio lineup for a performance at Oakland's Uptown Nightclub. Although Rempis hadn't worked with Ochs before, the latter's renowned experience in the all-horn lineup of The ROVA Saxophone Quartet made the idea especially appealing. From the first few notes, that initial meeting flowed comfortably, yet in totally unexpected ways, with all three making logical structural decisions that gave their improvisations the feel of through-composed pieces. Eager to continue developing this language that the three later came to dub invisible architecture, Rempis made a follow-up trip to the Bay Area in the spring of 2012 for two more concerts and a studio recording session. Spectral, the first document of their work, was the result of that visit, and shows an improvising trio playing out an audible game of chess. Not satisfied with simply existing in the moment, these three combine sensibilities to look many moves ahead, setting each other up time and again to capitalize on structural possibilities that give rare and meaningful form to an otherwise very spontaneous music. The band went on tour the U.S. in both 2015, and 2016, and released their second digital-only recording Neutral Nation in 2016.