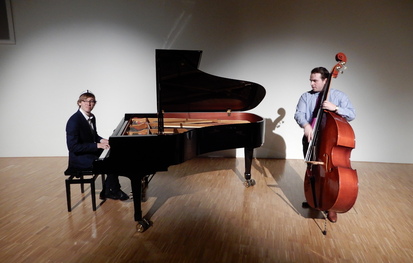 Pianist, composer Jochem le Cointre began his musical career at an early age through the records of his uncle and lessons at the local music school in his hometown of Leeuwarden, Netherlands. Shortly after he started winning prizes in jazz and classical competitions such as the Prinses Christina Concours and the Parnas concours. He continued his studies at young talent class of conservatory Groningen and Zwolle, while completing his high school diploma. After the Veneto Jazz Summer School in 2011, he was awarded a scholarship to study at the New School for Jazz in New York. He moved there in 2012 with further support from Dutch foundations VandenEnde Foundtion and Prins Bernhard Cultuurfonds among others. During his four year bachelor he also studied classical piano and composition with Dr. Ronn Yedidia at the New York Piano Academy. Le Cointre performed in jazz clubs and special events throughout his New York Years, including commissions for compositions and arrangements performed at the School's Graduation Commencement in Madison Square Garden 2014. As his thesis project, Jochem wrote and produced his first opera "Steppenwolf - a musical retelling" based on the novel by Hermann Hesse. Among others he collaborated with choreographer Tadej Brdnik of the Martha Graham Dance Company. After graduating in New York, Le Cointre now resides in the Netherlands where composes, teaches, and performs.

Simon Mastri is an unconventional jazz bassist. Influenced by artists ranging from Bach to Stan Getz, and Fela Kuti to Johnny Cash, Mastri fuses various musical genres to create a unique sound. Although classically trained by the principle bass player for the Cleveland Orchestra, Simon gained an interest in Jazz while attending The Music Settlement and began to study under Glenn Homles. He created his own combo and began gigging in Cleveland at venues including Nighttown. Simon is a former student of The New School for Jazz and Contemporary Music in New York City, under direction of such teachers as Reggie Workman and Bobby Sanabria. After The New School, Simon has remained living in New York, and currently studies with Buster Williams. Mastri is also a composer and film scorer, and has his own hip hop big band.