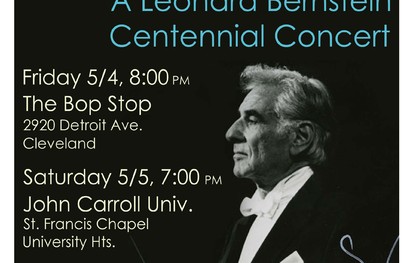 As part of their American Icons Series. The Cleveland Chamber Collective presents A Leonard Bernstein Centennial Concert at BOP STOP. This event is FREE!

Leonard Bernstein is a larger than life personality in the world of Classical Music. He was a world famous conductor, composer, pianist, and music educator. Many know him for his musicals, like West Side Story, but too few know that his oeuvre is wide ranging in style, theme, and medium. His Piano Trio, played by Beth Woodside, Ralph Curry, and Randy Fusco, is an early work which displays his clever wit and love of life. Halil, a tour de force featuring soloist Mary Kay Fink, is from the 1980’s, and is dedicated to the memory of an Israeli tank driver. This work is moody and episodic, using a wide battery of percussion. Bernstein stretches himself, including nostalgic tonality and edgy 12-tone writing.

Bernstein’s MASS was a theatrical work, commissioned by Jackie Onassis in honor of her deceased husband, John F. Kennedy, for the opening of the Kennedy Center in Washington DC in the 1970’s. Bernstein never shied away from controversy, and this work, which focuses on what he considered the crisis of the 20th Century, Faith, held up an anti-war mirror to the Nixon administration. The eclecticism of the work made it a chaotic spectacle, but its message of resistance, inner struggles, and ultimately hope, make this a timely piece. Vocal soloists Jarred Leal and Christine Fader join our chamber orchestra on new arrangements by conductor, Ty Alan Emerson.

And other treats and rarities…