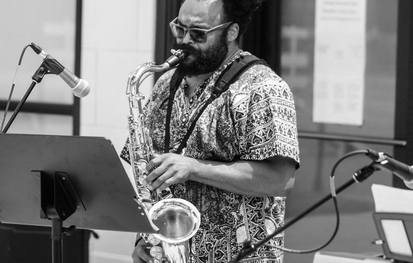 New Ghosts and BOP STOP have partnered once again to showcase some amazing avant-garde music!

JayVe Montgomery:
"In writing a Bio for JayVe Montgomery, I visited the digital vestige of his work on the internet. And as I pieced together his music, video, site-specific work, and collaborations, the impressions that they make lead me back to why I found his saxophone so compelling when I first heard him: His work interweaves time and consciousness. Listening to him play is to lose a sense both, and to engage deeply in both. JayVe Montgomery is a true creative force, and has a singular mind." -Andrew Auten

Joining JayVe is Bbob Drake on Electronics & Matthew Frerck on bass. bbob drake has been creating experimental music and audio in Cleveland for the last 45 years. From a start as a guitarist, his current focus is on electro-acoustic improvisation in both solo and group settings. His solo work spans a range from "lowercase" or "onkyokei" aesthetics (quiet, minimalist, abstract), to free jazz and more aggressive noise genres. He designs and builds the majority of his own instruments, both electronic synthesizers and original electo-acoustic designs. bbob has lead workshops in experimental electronics for music at Spaces and other venues, and he designs and sells printed circuit boards for DIY synthesizer enthusiasts. bbob's most recent recorded releases are "Failure Cake" (solo CD) and "Curiouser" (with Cleveland drummer J. Guy Laughlin)

Noa Even is a Cleveland-based saxophonist dedicated to sparking deeper interest in the arts of today through the performance of contemporary music. She is a co-founder and the Executive Director of Cleveland Uncommon Sound Project (CUSP), a non-profit organization aimed at strengthening the artistic engagement of the Northeast Ohio community by championing the creation and performance of new music.

Patchwork, Noa’s saxophone and drum set duo, collaborates with composers to build an eclectic body of new music. They have teamed up with Eric Wubbels, Charlie Wilmoth, Osnat Netzer, and Ruby Fulton, among others. Notable performances include Omaha Under the Radar, Frequency Series, Bowling Green New Music Festival, and NEOSonicFest. In 2017, they were awarded a residency at Avaloch Farm Music Institute to collaborate with composer Hong-Da Chin.