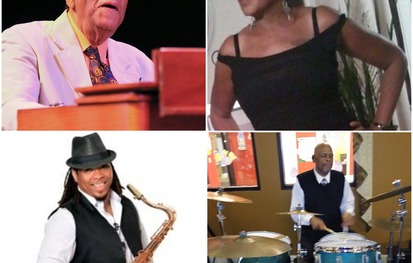 Tonight will be an unforgettable evening of jazz as vocalist, Shirley Cook, leads an all star band featuring:

Shirley Cook is a jazz vocalist with a style deeply rooted in the Blues and rousing gospel music. Cook has long had a romance with music and singing, that was first inspired by her father's side of the family who were gospel singers.

Born in Stotesbury, West Virginia, Ms.Cook moved to Cleveland with her family when she was 2 years old. By the time she was eleven, she was singing in a gospel ensemble with her aunts, the Cook singers, who performed for church and social functions. throughout her teen years and into adulthood, Cook continued to sing in church choirs with her aunts.
Ms.Cook officially began her professional jazz singing career in 1983. she worked with some of Cleveland's most notable jazz musicians including saxophonists Hank Geer and Weasel Parker, Musa Abdula, Pianist Carl"Ace"Carter, Neal Creaque, Drummers Lawrence Jacktown Jackson, Greg Bandy, Willie Smith's Little Big Band, Guitarists Teddy Pantelas ,Ray Miller, Reggie Pittman and Keyboardist Eddie Baccus Sr. She Continues to work with some of these musicians today.

Ms. Cook's style is subtle and relaxed, in a manner much like Carmen McRae, the jazz vocalist say her early inspiration began when a friend Tim Swan lent her some albums by, Billie Holiday,this opened Ms.Cook up to such inspiring singers as Shirley Horn, Etta James,Abbey Lincoln, Betty Carter, Nancy Wilson and Dinah Washington as well instrumentalists such as john Coltrane, Dexter Gordon, Charlie,Parker and Thelonius Monk.

Shirley Cook has been described as" a dynamic jazz vocalist who has her own style with ballads and tempos."