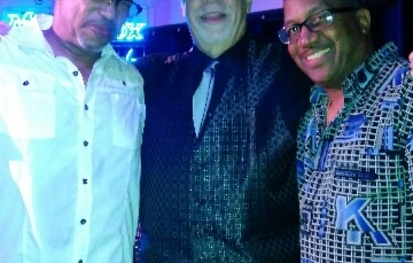 Moss Stanley, born and raised outside of London, England discovered his musical talents at a young age. It was when his older sister began struggling through piano lessons that Moss ventured to the piano and effortlessly played what he heard. From then on Moss nurtured his natural talents and at the age of 19, moved to the United States. With just a few articles of clothing, no formal training and his magical fingers, he began his new life as a musician. It was in the early 1980’s that he formed one of Cleveland's top society bands, “Nitebridge”. Moss has been musical director for broadway musicals and has performed with the likes of Martha Reeves, Spyro Gyra, Chuck Berry, Blood Sweat & Tears and Robert Lockwood Jr.

Moss's trio will be performing with Northeast Ohio's own jazz flautist and national recording artist, Herb Wilborn Jr! Dynamic, expressive, soulful and passionate are words that best describe the unmistakable sound of flautist Herb Wilborn Jr. Dubbed “Cleveland’s Finest Jazz Flautist” by the Cleveland Plain Dealer and winner of the Midwest Urban Music Awards for “Best New Artist of any Category”, Herb has earned his stripes through hard work, dedication, discipline and his overall love for playing music.