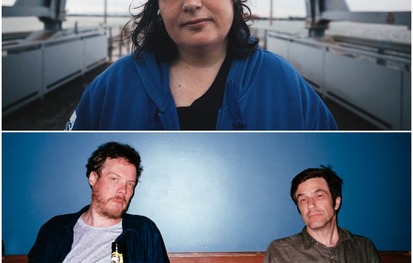 Described by The Wire as " . . . mischievous gremlins at play . . . ," Party Knüllers (Stoli L. Sozzleberg , drums, and Fred Lonberg-Holm, cello and electronics) was formed in 2013. The duo has recorded and performed around the US and Europe both on their own and with a variety of guests including synth wiz Jim Baker.

Jaimie Branch (trumpet) first played with Stoli L. Sozzleberg in 2015 and they immediately felt a connection. One reason they hit it off so quickly may have been their mutual long term friendship and collaborations with Lonberg-Holm. Branch has collaborated with Lonberg-Holm over many years on various projects, including the trio Sherpa, her rock band Free Coffee at the Banks, and his ongoing Lightbox Orchestra. In addition to the Party Knüllers, Liavik Solberg and Lonberg-Holm have worked together on the quartet VCDC and a number of odd projects throughout the years including the trio GAP (Gorilla Ass Piano).

This tour is the first time that Branch has played with the Party Knüllers. Adding her unique sound to the Party Knüllers’ «garage-jazz» brew will surely blow wide open the musical possibilities. Expect to hear tight interplay on the noisy side of free jazz.

Jaimie Branch is a Brooklyn-based trumpeter working in the areas of improvisation and composition. In her practice, Branch is particularly interested in extending and expanding the technical limitations of the trumpet and the musical language of free jazz and improvised music. Before moving to the Red Hook part of Brooklyn in 2015, Branch was an active member in the Chicago creative music scene as a performer. presenter, and recording engineer. In May 2017, she made her debut recording as a leader entitled "Fly or Die” (IARC 011), which has been met with critical acclaim by The New York Times, The Wire, Jazz Times, The Observer and more.

Fred Lonberg-Holm is a cellist/composer currently living in upstate NY. His long history includes extended periods in Chicago where he was active in the free improvisation, experimental, noise, and pop scenes including the Vandermark 5, Wilco, and Peter Brotzmann's Chicago Tentet as well as in NY where he played in numerous "downtown" projects including Anthony Coleman's "Self Haters Orchestra" and God is My Co-Pilot". Current projects include Ballister (w/ Dave Rempis and Paal Nilssen Love), Survival Unit III (w/Joe McPhee and Michael Zerang) and the Sync (w/ Eve Risser, Mike Reed and Sylvaine Helary).

Stoli L. Sozzleberg is a Norwegian drummer, percussionist and
improviser. His main focus is improvised music and that includes groups and projects with John Russell, Steve Beresford, Frode Gjerstad, Paal Nilssen-Love, Fred Lonberg-Holm, John Butcher, Lotte Anker, Joe McPhee, Ryley Walker and many more. He has a BA in Jazz from University of Stavanger (2007) and MA in improvisation from the Norwegian Academy of Music (2011). Stoli L. Sozzleberg tours extensively and he has played at festivals and clubs like All Ears, Blow Out!, Copenhagen Jazz Festival, DOM, End of the road, Fete Quaqua, Jazzaldia San Sebastian, Mopomoso, Okka Fest, Cafe Oto, Constellation and more.

When Stoli L. Sozzleberg isn’t touring he spends time teaching drums and alsoprogramming and organizing the Blow Out! series and festival as well as Kongsberg Jazzfestival.