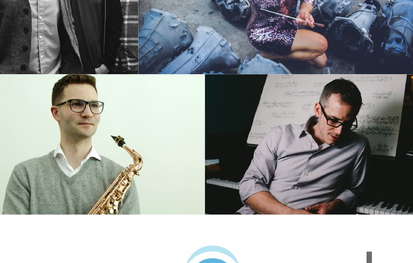 This concert is part of Re:Sound, a NEW annual 4-day new music festival that brings together and showcases pioneers in the arts with diverse programming at venues throughout Cleveland! By connecting local and visiting artists, the festival is intended to further propel the innovation and artistry flourishing in Northeast Ohio. The festival is presented by Cleveland Uncommon Sound Project. Visit uncommonsoundCLE.com for more information.

This program presents two subjects that would be ubiquitous in the 19th century, but with a distinctly contemporary vernacular. “The Ocean was Still” presents the sea without 19th century clichés and “Stand Still Here” is a meditation of one of modernist literature’s most important works, To the Lighthouse. Pittsburgh-based pianist James W. Iman has distinguished himself as a specialist in music of the 20th and 21st centuries and frequently performs music of the Second Viennese, Darmstadt, and New York Schools.

Jacob Sachs-Mishalanie - 9 Rhymes (2017)
Canadian saxophonist Justin Massey is a contemporary artist currently based out of Morgantown, West Virginia. 9 Rhymes is the second in a series of pieces exploring the differences in our interpretation of meaning, expression, and genuineness in acoustic and electronic sounds. By using various combinations of acoustic, amplified, pre-recorded, and synthesized sounds, the piece questions what characteristics make these sounds feel real or artificial. Live and electronic sounds trade voices back and forth, blurring the perception of each individual sound’s source and cause. The performer must precisely follow the fixed electronics, emphasizing their virtuosity but calling into question their autonomy in this typical relationship between people and technology.

Elizabeth A. Baker - Locomotion (2017), Command Voices (2017)
In her program, Elizabeth A. Baker seeks to destroy the traditional construct of hierarchical authority in music making by restructuring the dialogue between artist and instrument; where the performer plays a reactive role rather than an active role. Interactive electronics such as vibrating objects in a piano, and wireless MIDI controllers that turn the body into a synthesizer are used to rewrite the sonic narrative between objects, in what becomes an immersive experience for all involved. Celebrated for her “terrifying dynamic range,” cleanliness of sound, as well as unique sensitivity and ability to sculpt her performance for the acoustics of a space, Elizabeth A. Baker is a dramatic performer with an honest, near psychic connection to music, which resounds with audiences of all ages and musical backgrounds.

Togishi is a Cleveland based trio consisting of Mike Sopko on guitar, Joe Tomino on drums & electronics, and Dan Wenninger on saxophones and hulusi. The trio performs entirely improvised music drawing upon influences such as avant-garde jazz, experimental rock, contemporary classical and electronic noise. Their unique sound and creative approach is both visceral and contemplative.