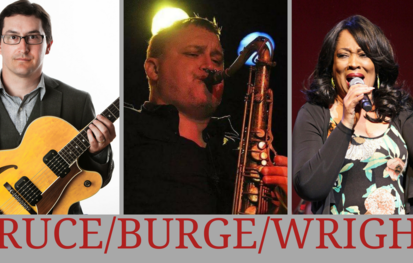 Celebrate Father's Day with a new trio formed of the most in-demand artists in the Cleveland/Akron area. They specialize in unique arrangements of jazz standards and Brazilian bossa novas.

A professional vocalist for over thirty plus years. She revels in the styles of jazz, r&b and pop. Has toure d throughout the United States and Canada performing in top clubs and concert halls.

In 2008 was given the Jazz Legend Award from Tri-C Community College. Also studied under Dr. Howard Tucker from Oberlin.

Christopher Burge began his musical career at The Ohio State University where he studied saxophone and music theory with Gene Walker and Hank Marr, graduating with a Bachelor of Music in Jazz Performance in 1997. During that time, Christopher toured Thailand with free-jazz group Honk, Wail, and Moan, toured Europe with the OSU Jazz Ensemble, played on a USO tour of maximum-security prisons, and played concerts with Barry White, Louie Bellson, Stanley Turrentine, The National Black Music Caucus Big Band, and the Stars of the Lawrence Welk Show.

Currently, Christopher teaches saxophone at Skyline Music in Westlake, Ohio, and performs with his own trio and the blues-swing band Blue Lunch, which has just released its 8th CD, ‘Above the Fold’, on RipCat Records.

Dan Bruce is a recent transplant to Ohio after spending a decade as an important member of Chicago’s jazz community. He is active throughout the Midwest and nationally as a performer, recording artist, composer and educator. He has performed on more than twenty albums as a sideman, and just released, Earthshine, his second album as leader in late 2017.

As a performer and recording artist, Bruce has had the opportunity to work with a number of eminent musicians including Seamus Blake, Ali Jackson, Dan Wall, Lynn Seaton, and The Cleveland Jazz Orchestra.