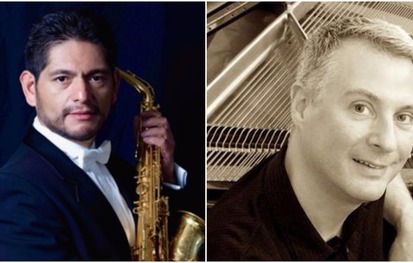 Cleveland weclomes The Classical Saxophone Project to the BOP STOP stage. This evening's program features Javier Oviedo on sax and Ron Palka on piano. The mission of The Classical Saxophone Project is to reignite the awareness of the traditional classical repertoire of the saxophone through live performances and recordings and to extend it through commissioning new music. CSP is also devoted to education, focusing on young artists by offering private instruction, lectures, and master classes.

One of the brightest soloists of the classical saxophone world, Javier Oviedo is acclaimed by the press and the public for his lustrous tone, passionate musicianship, and formidable technique. He works tirelessly to present the saxophone as a unique, versatile, exciting classical instrument. His continuing research has helped introduce the rich tradition of musical compositions for the saxophone family. Along with these older works, he has commissioned and premiered a dozen new pieces, both in the United States and abroad. He is especially prized for his eclectic programs from transcriptions to older masters such Bach and Debussy, to music of 20th Century masters such as Elliot Carter, Paul Hindemith, John Corigliano. Mr Oviedo has championed new pieces written expressly for him.

Mr. Oviedo has performed around the world: China, Latin America, Eastern and Western Europe, Paris, Barcelona, the Republic of Moldova, and in the Russian Federation. He has appeared with the New Jersey Symphony, the Austin Symphony, the Chattanooga Symphony, l’Orchestre Lamoureux, l’Orchestre à cordes d’Ariège in France, and both National Philharmonics of Moldova and Russia in Oryol. An accomplished chamber musician , Mr. Oviedo has performed on some of the world’s most prestigious stages, including Carnegie Hall, Lincoln Center, Salle Cortot, and The United Nations.

His debut recording, The Classical Saxophone: A French Love Story, featured original music for saxophone and orchestra from the 19th and 20th Centuries. The disc received high praise by industry critics and the public at large. The CD was recorded in Paris with the Orchestre Pasdeloup under the direction of Jean-Pierre Schmitt.

In 2014 Oviedo released two new recordings. And So It Begins…, which features chamber music by New York composer Debra Kaye, highlighted his playing on two tracks. Lazy Afternoon: Salon Music for Classical Saxophone of Byron Bellows, recorded with St. Luke’s Chamber Ensemble and lead by Maestro Jean-Pierre Schmitt, consisted of material written especially for him. All these recordings are available on Amazon, iTunes, and via Pandora Internet Radio.

Ron Palka is a degreed librarian as well as an active and versatile musician. A native of Ohio, he studied in Cleveland with British pianist, Clive Lythgoe and in New York City with Phillip Kawin of the Manhattan School of Music. In addition to his MM in performance from Manhattan School, Ron also earned his MLS degree at Kent State University.

Ron’s performances have taken him as far afield as Brazil, where he was invited to teach and perform for the Music Foundation of Capão da Canoa. He has been a faculty member at several area music schools, including the Oberlin Community Music School, and has served as church organist and Music Director at Redeemer Lutheran Church and at Church of the Epiphany. With pianist Coren Estrin Mino, he has performed often in the Cleveland/Akron area as a member of the Double Digit Piano Duo. As the official accompanist for the Coastliners, he had the great pleasure of opening for Joan Rivers at the Palace Theater in October 2013 and at the State Theater for the Big Cleveland Sing. Accompanying also provided him the opportunity of performing at Carnegie Hall in 2013. He can be heard accompanying cellist Catherine Clyatt Schroth on her debut CD entitled "Songs for My Son.”