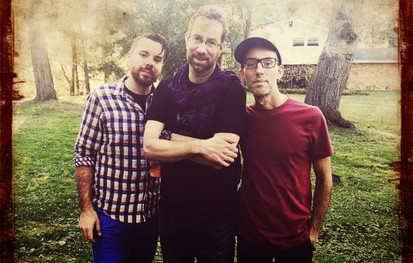 At 7pm on July 8, 2018, birth returns to BOP STOP to perform a concert to raise funds for a Vinyl pressing/release of their new double album!

Those who joined us at the BOP STOP last year got to see a riveting concert of new music from this trio now 20 years in the making. This concert promises to be a beautiful night of music. Birth is celebrating the group's 20th anniversary by producing a double vinyl album release this Fall. This concert will feature classic birth compositions, new pieces, and improvisations. On Sunday, July 8, immerse yourself in an evening of Cleveland born and bred experimental jazz.

In October of 2016, birth, the fiercely original saxophone, bass, drum trio that emerged from Cleveland, Ohio 20 years prior, loaded their instruments (and some very nice microphones) into a large windowless brick building in the Hingetown district on the near west side of Cleveland Ohio. Their goal being to document a moment in time, which broke an excruciatingly long musical silence for the band. Once constantly performing and recording, the trio had not performed in over a decade and in typically bold birth fashion, picked up where they left off, and created their next record, 12 years overdue.

After a meticulous process of mixing and mastering this recording, birth is now preparing to bring this music to their friends, fans, and supporters. Their goal is to create a vinyl release of this material, a first for birth, and an exciting endeavor for the band. “We are really grateful for the chance to release this music in analog form.” Says birth saxophonist Joshua Smith. “Other than our original tape release from 1998, we have only put out our music out on cd, and digitally, and this will be the first time that a birth record will be pressed. We can’t wait to share this music with the world and are really excited to do it on vinyl.” Of course the band will also release this record digitally as well, but they are reaching out at this time to ask for support in funding the process of turning this record into a vinyl release.

The record will feature a carefully curated collection of unreleased pieces, new compositions, and improvisations. It will feature original artwork from Colleen Sanders, and will be presented on two discs.

Yes, after a 12 year hiatus, Birth will release its next record in the form of a double album on vinyl.

History: In the late 1990s and early 2000‘s, a trio out of the unlikely locale of Cleveland Ohio made waves is the World of creative music at large. Free jazz, rock, electronics, jam band, microtonal improvisation, all witnessed the presence of this young saxophone, electric bass, drums trio that was simultaneously sophisticated, and raw, musically graceful and full of fire. Dedicated to musical integrity, telepathic group dynamic, and exploration of new ideas, birth carved out a potent, original spot in the music world.

Their original music spawned both admirers and imitators, and they had the good fortune of performing and collaborating with some of their own musical Influences. Birth has been cited as an inspiration for many musicians and bands, and this no holds barred trio started crisscrossing the country and even Europe, in its development of this original amalgam of styles.

During this initial tenure they released two studio records and a few live recordings before unofficially entering a long period of hiatus starting in 2005.

After reuniting in 2016, birth found itself in a unique position of having their well-developed musical language that had only deepened with time. They found themselves older, wiser, and more skilled on their instruments, while speaking a native tongue of their youth. The band entered the studio in the fall of 2016 in Cleveland. They recorded an array of unreleased pieces, new compositions, and improvisations marking a moment of joyous reunification and a new era for the bands. Results are a beautiful, winding, diverse set of music that could only come from a deep and lengthy history with one another. Now, they are preparing to release this long awaited set of music to the world.

Here is a link to the Go Fund Me Campaign: