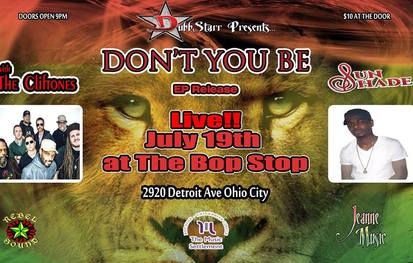 Join us for a late night summer Reggae party! Sun Shade will be releasing his new EP entitled Don't You Be to be later this summer. He'll be joined by Cincinnati's most crucial reggae band The Cliftones. Come and get your groove on to some sweet reggae music.

Born and raised in Montego Bay, Jamaica, Sun Shade started his professional singing career during high school. He preformed at local festivals, which enabled him to hone in on his unique and distinct vocal style. Sun Shade has been highly influenced by the likes of Sanchez, Maxi Priest, Dennis Brown, Phil Collins, Alton Ellis, and has shared the stage with the likes of Beenie Man, Baby Cham, Wayne Wonder, Mr. Vegas, Terror Fabulous and Jr Reid just to name a few. He has vocalized many of these artist, and now hopes to emerge as his own unique artist by preforming his original songs. With his dedicated heart and determination, Sun Shade moved to the United States in hopes of breaking through internationally and setting forth new standards in Reggae Music.

Sun Shade’s arrival to the United States has propelled his musical career to another level. He has marketed singles such as Jah Love, Honey, Forever Love and a remake of Robert Craig’s “Smoking Gun”. Within the first few years, he went on a Midwest tour with Luciano, Sizzla, Movado, Leroy Sibbles, Gregory Isaac, Sanchez, and Mikey General covering cities such as Cleveland, Columbus, Cincinnati and Chicago. Sun Shade has continued this progressive movement into the musical field by constantly performing at many different venues. Ringing in the Millennium, Sun Shade toured to South Carolina, Florida and Jamaica.

Sun Shade is currently in the studio working on new music for his upcoming EP to be released Summer of 2018.

The Cliftones are a group of musicians, who together, create powerful music - a unique style of crucial, powerhouse roots reggae. In the true spirit of roots and culture, The Cliftones blend the sounds of a relentless dance groove with positive upliftment in the lyrical message. The result is an individual sound that is undeniably their trademark. Their influences range from The Gladiators, The Congos, Lee Perry,Tony Rebel, Buju Banton, Michael Rose,Yellowman, Black Uhuru, Aswad, Bob Marley, Eek A Mouse, Dennis Brown, Max Romeo and many others.