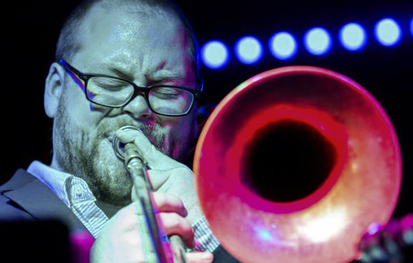 We hope you can join us for a special hometown concert featuring Sam Blakeslee and his Large Group. This band is so much fun and we highly recommend purchasing tickets ahead of time. There is nothing quite like hearing a big band at BOP STOP!

Originally from Columbus, OH, Sam Blakeslee is a New York City based, award-winning trombonist and composer. Sam has performed at multiple jazz festivals across the world such as the Fano Jazz Festival, Mosciano San Angelo Jazz Festival, and Parma Jazz Festival in Italy as well as the Deutsche Musikfest in Chemnitz, Germany. In 2010, Sam was selected one of fifteen people nationwide to attend The Steans Institute for the Young Artist at Ravinia where he studied with Curtis Fuller, Rufus Reid, Dr. Nathan Davis, and Dr. David Baker. He also attended Betty Carter’s Jazz Ahead at the Kennedy Center which is a two week residency where his original music was broadcasted to worldwide audience. In May 2014, Sam attended the International Workshop for Jazz and Creative Music at the Banff Centre where he studied with Vjiay Iyer, Ambrose Akinmusire, Steve Lehman, Tyshawn Sorey, Nir Felder, Warren Wolf, among others. Sam is also very busy as a freelancer, and he has played with artists Joe Lovano, Sean Jones, Jiggs Whigham, Aretha Franklin, Dominick Farinacci, Bernard Purdie, Wessell “Warmdaddy” Anderson, and Derrick Gardner.

Sam leads two main projects including his "Sam Blakeslee Large Group" which is a 17-piece contemporary jazz orchestra that features original compositions and arrangements in a variety of styles and moods. The Large Group held a monthly residency at Blu Jazz in Akron, OH from January 2016-July 2017. Blu Jazz was recently voted one of the "Worlds Best Jazz Clubs" by Downbeat Magazine. Through the Blu Jazz Masterclass Foundation, the group featured many special guest artists including from Akron-guitar virtuoso Dan Wilson (and member of the Joey DeFrancesco's Trio and Christian McBride's Tip City), NYC jazz artists Dan Pugach, Nicole Zuraitis, Dave Smith, as well as renowned pianist and composer Bill Dobbins. One of the artistic missions of the Large Group is to constantly be expanding the repertoire of the music across many styles, leaving both the audience and band members guessing what each concert will hold. The Sam Blakeslee Quintet features some of NYC's most in demand jazz musicians including Jorn Swart (piano), Cory Todd (bass), Dan Pugach (drums), as well as Cincinnati-based guitarist Brandon Coleman. In its short existence since February 2016, the group has done several tours of the Midwest and East Coast. In September 2016, the quintet recorded at Systems Two Studios in Brooklyn to record Sam's debut album "Selective Coverage" which was released in October of 2017. In March 2018 Sam was awarded the David Baker Prize in Composition for his piece Slow Growth/New Growth from the Ravinia Steans Music Institute’s Bridges: An International Jazz and Classical Fusion Competition. His piece will be premiered on June 9th at Martin Theater for the 2018 Ravinia Festival along side the other two finalists Zach Bornheimer and Gene Knific, as well as RSMI faculty members Rufus Reid, Billy Childs, and Nathan Davis.

Sam holds a Bachelor of Music Degree in Jazz Studies from Youngstown State as well as a Master of Music in Classical Performance from the University of Akron. During his time at the University of Akron, he was a member and composer for the Jazz Trombone Group, which won first place in the International Trombone Association’s Kai Winding Jazz Trombone Ensemble Competition. In June of 2013, he traveled Columbus, GA to play his original music at the International Trombone Festival with the University of Akron Jazz Trombone Group. He is also well versed in classical music and was a 2013 recipient of a Tuesday Musical Scholarship in Brass. As a former resident of the Cleveland & Akron, OH area from 2013-2017, he worked extensively in Jazz Education and served as the Instructor of Jazz Trombone at Youngstown State University from 2013-2014, Director of the Jazz Prep Program at Cuyahoga Community College from 2014-2017, as well as the Instructor of Improvisation at the Cleveland Institute of Music.