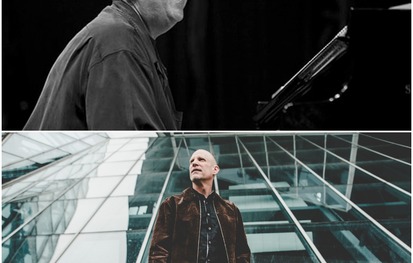 Holy smokes, legendary pianist Kenny Werner is in the house tonight!! He is joined by Bobby Selvaggio on sax, Zaire Darden on drums, and Jordan McBride on bass. This show is presented in partnership with Blu Jazz+.

Kenny Werner has been a world-class pianist and composer for over forty years. His prolific output of compositions, recordings and publications continue to impact audiences around the world. In 1996 he wrote his landmark book, Effortless Mastery, Liberating The Master Musician Within. Werner has since created videos, lectured world-wide and authored many articles on how musicians, artists or even business people can allow their “master creator” within to lift their performance to it’s highest level, showing us how to be spontaneous, fearless, joyful and disciplined in our work and in our life.

Kenny was awarded the 2010 Guggenheim Fellowship Award for his seminal work, No Beginning No End. No Beginning No End is a musical journey exploring tragedy and loss, death and transition, and the path from one lifetime to the next. Utilizing over 70 musicians, Kenny’s third album for Half Note Records is an expansive composition featuring Joe Lovano, Judy Silvano, Wind Ensemble, Choir and String Quartet.

Born in Brooklyn, NY on November 19, 1951 and then growing up in Oceanside, Long Island, Kenny began playing and performing at a young age, first recording on television at the age of 11. Although he studied classical piano as a child, he enjoyed playing anything he heard on the radio. In high school and his first years of college he attended the Manhattan School of Music as a classical piano major.

His natural instinct for improvisation led Kenny to the Berklee School of Music in 1970. There he sought tutelage of the renowned piano teacher Madame Chaloff. A Her gracious wisdom and inspiration became a driving force in Kenny’s conception: A music conscious of its spiritual intent and essence.

From Boston, Kenny traveled to Brazil with the saxophonist Victor Assis Brasil. There he met Victor’s twin brother, Brazilian pianist Joao Assis Brasil. He studied with Joao, who provided another piece of the puzzle for Kenny’s conception that would lead to Effortless Mastery, his landmark opus on how to allow the master musician from within to manifest. The book, is now available as an ebook on kindle and in Ibooks.