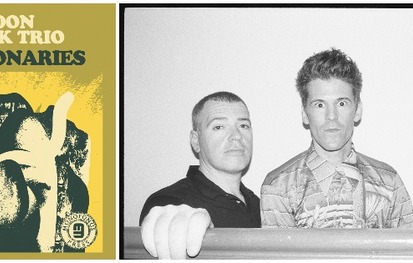 From the idiosyncratic musical mind of guitarist/composer Brandon Seabrook comes his latest album Convulsionaries (Astral Spirits, Sept. 2018). In his close to two decades in NYC, Seabrook has garnered international acclaim for his sui generis approach to the electric guitar, one which astounds with tremolo pyrotechnics and an entropic, miasmic sensibility. While those elements are in full effect on Convulsionaries, they’re met with a mature and thorough sense of dynamics, pace, groove, and feeling.

Joining Seabrook on this stellar release and tour are the young upright bassist Henry Fraser (Anthony Coleman, The Full Salon) and cellist Daniel Levin (Tony Malaby, Mat Maneri), two revolutionary string players who have been working in various creative ensembles in Brooklyn for years. Together, the string trio tackle Seabrook’s thorny compositions, which perpetually surprise and unseat the listener throughout the album’s proceedings. Seabrook's compositions are a study turning a sense of impeding doom into cathartic releases, allowing equal space for improvisation and rigid execution of the complex scores. The ensemble ransacks the history of their respective instruments, bringing light to new timbres and exposing their untapped percussive capabilities. The live performance is rife with spastic movement; Levin swats at inanimate objects with his bow while Fraser threads crushed aluminum cans between his strings. Center stage sits Seabrook, swaying open-mouthed, conducting the haunting tunes with his guitar neck in the foreground. This exciting alternative approach to a string trio will leave audiences feeling like they just took a trip through a Bartokian wormhole; awestruck and enlightened.