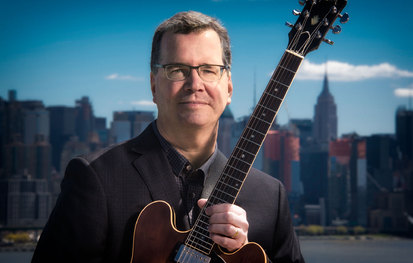 An Eau Claire, Wisconsin native, jazz guitarist Pete McCann has been an integral part of the New York City jazz scene for over 25 years. He has just released Pay For It On The Other Side, his sixth recording as a leader. A sought-after sideman from duos to big bands, with a unique and wide-ranging set of musical skills, McCann has played guitar on over 100 CDs. Pete has performed in every type of venue from jazz clubs to jazz festivals, schools to concert halls and even Carnegie Hall. He has traveled to 18 countries and has played in almost every state in the USA.

McCann received his Bachelor of Music degree from the University of North Texas and has taught at New York University, The New School, City College and the Maine Jazz Camp. He has written articles for Guitar Player and DownBeat magazines and was featured in the NYC Jazz Guitar Summit for the True Fire video series. Pete is endorsed by D’Addario and Planet Waves.