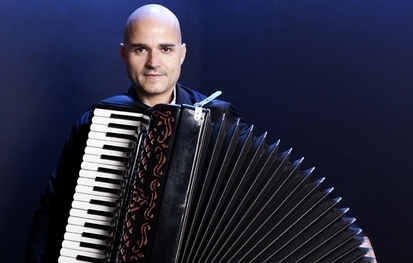 There are some musicians who always get classified in the "beyond" categories in the magazine polls. They are usually musicians that are in such a unique area of music that there are few peers to make a single category for their respective instrumental talent and focus. Victor Prieto belongs to that list.

Grammy Winner Victor Prieto is hailed by The New York Times as "A fiendishly skilled accordionist and composer" and by The All About Jazz as “One of the best World music and Jazz accordionists now days”.

He has changed the way musicians and spectators view accordion by revolutionizing both technique and sound (Chord approach on both hands). His love for the traditional Galician music and classical education enriches his compositions with explosive rhythm and colors uniquely combining Galician Roots, Celtic, Brazilian, Jazz, Tango, and Classical music

He teaches Master Classes in US Berklee College of Music, "Playing outside the Box", Spain, Italy, Portugal and has headed the jazz accordion studies at the Brooklyn Conservatory, New York.

Some of Victor’s awards and prizes are: The Creative Performer award from the Spanish Association of Artists and Performers, and the first prize CMZK’s Concourse of Composition.

Victor Prieto holds a Degree in Jazz accordion performance from Berklee College of Music, where he studied with a full scholarship and a Diploma in classical accordion from Ourense - Spain Conservatory. He is the only one to date to specialize in jazz accordion studies, Berklee College of Music does not offer any classes focusing on accordion. Uninhibited by these circumstances Victor created his own study program applying the expertise offered by educators at Berklee to the accordion. His students are internationally renowned accordionists and teachers. Victor Prieto is a Petosa Artist.

Since then, Ricky has performed with some of the giants in Latin Jazz today. These included performances with legendary jazz icons such as: Ray Barretto, Endel Dueño, Giovanni Hidalgo, Jerry González, Chuchito Valdéz, Tony Lujan, Erik Figueroa trio, Mandy Visoso and his orchestra, as well as memorable performances with masters such as: Branford Marsalis, Danilo Pérez, David Sánchez, and Ignacio Berroa.

In 2006, Ricky represented the United States alongside 150 groups that participated in a world tour known as "The Jazz Ambassadors," as part of the 2006 Jazz at Lincoln Center American Music Abroad “The Rhythm Road Program.”

Vince Cherico: 3 Time Grammy Award Winner, Vince Cherico, is the drummer for many top Artists in today’s jazzand world music scenes. From 1995 - 2006 he was the drummer with Ray Barretto & New WorldSpirit, later The Ray Barretto Sextet. With Ray, he developed his reputation in Latin Jazz, touring the world and recording six CD’s, earning two Grammy nominations for the CD’s “Contact” and “Time Was, Time Is”.

In 1999 Vince first performed with The Caribbean Jazz Project and developed lasting musicalrelationships with Paquito D’Rivera and Dave Samuels. In 2003 he became a member of Dave Samuels & The Caribbean Jazz Project, and since then has been touring with them in North & South America, Europe and Asia with distinguished concerts at The Greek Theatre in Los Angeles, The Red Sea Jazz Festival in Israel, The Jarasum Jazz Festival in Korea and The Cotton Club in Japan.