Under One Sun @ BOP STOP 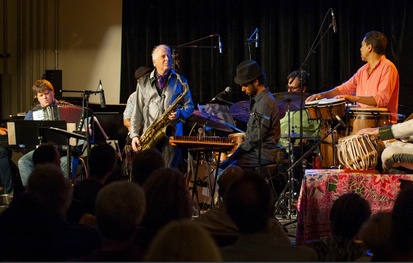 Under One Sun @ BOP STOP

It is the BOP STOP's four year anniversary weekend and we continue to celebrate with Under One Sun as the band returns to the BOP STOP for a one-night-only special appearance! This is world music infused jazz at its finest featuring Cleveland's own, Jamey Haddad.

Under One Sun is a diverse ensemble of longtime friends that Jamey invited to form as a band. Under One Sun's members represent five countries and whose ages span five decades.

“As my musical journey led me from one continent to another, and as I experienced citizen‘s of the planet looking for acceptance and understanding of one another, this team of players came forward,” says Haddad, a longtime professor of advanced improvisation and percussion at Oberlin Conservatory. “The sheer joy of every member experiencing their bandmates’ artistry truly exemplifies the human capacity to celebrate what makes us unique.”

Many musicians attempt to find a common language or palette of colors that create musical neologisms, but it’s an endeavor more easily dreamed of than made real. Under One Sun is an example of the dream come true. The group blends seemingly disparate sounds and flavors into a rhythmic stew that makes a musical feast—music that is visceral and intellectual at once. Changing time signatures with an ease that belies the fact that this is their first studio recording, Under One Sun leaves us satisfied and looking forward to hearing its next incarnation.