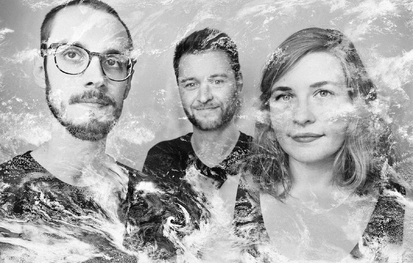 Twin Talk is long overdue for a return performance at BOP STOP. We hope you can join us to welcome back this Windy City band to the Forest City.

Chicago’s legacy of creative improvisers has had a profound influence on the band's defiant risk-taking and spontaneity. All About Jazz critic Mark Turner had high praise for the band's sophomore album noting that "Chicago has long been a bedrock of improvised music and Twin Talk represents a microcosm of that strength in today's environment."

MORE ABOUT THE BAND MEMBERS

The Chicago Reader identified KATIE ERNST as "one of the brightest lights on Chicago’s jazz scene [who] isn’t close to hitting her creative ceiling." In 2013 and 2014, Katie was one of 24 young artist-composers selected for the Betty Carter Jazz Ahead Program, an international jazz residency program at the Kennedy Center under the direction of pianist and MacArthur Fellow Jason Moran. He called her "A great bassist, composer, and lyricist [with] an uncanny ability to mix traditions....[F]ollowing her voice is like reading a great novel." In May 2014, Katie performed at the Chicago Symphony Center as part of Jason Moran’s Looks of a Lot premiere, which also featured Nasheet Waits, Tarus Mateen, Ken Vandermark, Theaster Gates, and Kenwood Academy Jazz Band. Katie is an active bandleader and side-woman in Chicago.

Chicago saxophonist DUSTIN LAURENZI has developed a distinctly personal approach to improvisation and composition that has garnered the attention of the city's creative music community. Recognized for his "offbeat approach to articulating harmonies and constructing melodies" (NextBop), Dustin's music is inspired and informed by jazz, folk, improvised music, and contemporary classical music. His wide range of influences and inventive improvisational sensibilities have made him a sought-after musician in many circles of Chicago's rich music scene.

In addition to performing and recording with Chicago jazz-centric projects, Dustin has recently toured with Grammy award-winning artist Bon Iver, with performances at Coachella Music Festival, Primavera Sound, the Hollywood Bowl, among others. Dustin also appears on the band's critically acclaimed 2016 release 22, A Million.