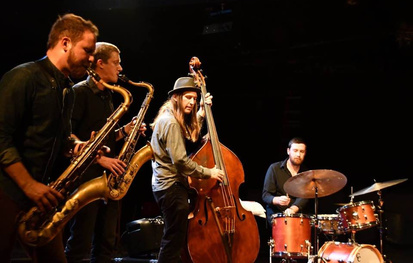 Black Diamond thrives on the chemistry and compositions of saxophonists Artie Black and Hunter Diamond. They met while studying under David Baker and Tom Walsh at Indiana University. A mutual admiration for the collaborative recordings of saxophonists Lee Konitz and Warne Marsh led them to experiment with their own two-tenor palette, and it quickly became apparent that the variance in their tonal and stylistic approaches created a captivating sense of balance. This dynamic has allowed them the unique compositional opportunity to write for the group in a way that is both deeply personal and instrumentally uncommon.

In Chicago, the band has been featured in residency at Andy's Jazz Club, the The Drake Hotel, and The Whistler. Other performances include associations with the Jazz Institute of Chicago, Sounds of the City Workshop, the Anagram Series at Elastic Arts, and the Chicago Jazz Composers Collective. Recently, the band has been on three U.S. tours to Florida, Pennsylvania, and the Pacific-Northwest. As active music educators, the group has collectively been featured as guest clinicians and lecturers of jazz and ethnomusicology at Slippery Rock University(Slippery Rock, PA), Whitworth University(Spokane, WA), and Pacific Lutheran University (Tacoma, WA).

August 2017 marked the release of Black Diamond's debut recording , "Mandala," on Shifting Paradigm Records. Featuring bassist Matt Ulery and drummer Neil Hemphill, the album contains nine original works by Black and Diamond. The title is inspired by the Vajrayana Buddhist practice of sand painting. The intent of a mandala is to form a representation of the enlightened mind through intricate patterning of layered grains of colored sand. The music on "Mandala" represents our grains laid; our mandala composed.

Black Diamond's newest release, recorded live at The Whistler in Chicago, is set for release in September 2018.