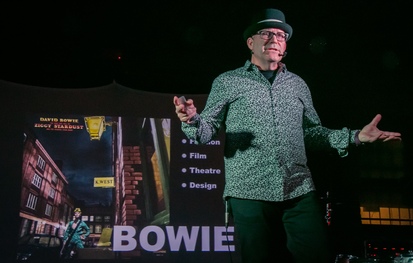 Tonight's session, “An Evening With(out) David Bowie,” opens with a nine-year-old David Jones, inspired by the film Don’t Knock The Rock claiming, “That was my ambition, to be in a band, playing saxophone behind Little Richard.”

Following formal art school tutelage under the father of future megastar Peter Frampton, and a half dozen failed singles, bands, record labels and stage looks, he finally hits with the sci-fi folk rock novelty Space Oddity. It would be three more years before his Ziggy Stardust character takes off, triggering a manic run of hit singles, bracing concept albums, and bizarre personas, each one diametrically opposed to the last. After exploding worldwide with Young Americans and Fame, Bowie hits rock bottom, as the excesses of mid-1970’s stardom threaten to engulf him.

Featuring three acclaimed LPs known as “The Berlin Trilogy” in collaboration with Brian Eno, this session continues through Bowie’s arena-sized celebrity with Let’s Dance, and his not-always successful, but perpetually rewarding experiments in the 1980’s and 1990’s. The presentation concludes with his mysteriously choreographed death following the symbol-laden albums The Next Day and Blackstar ★, and includes a review of newly released box sets and his final recordings.