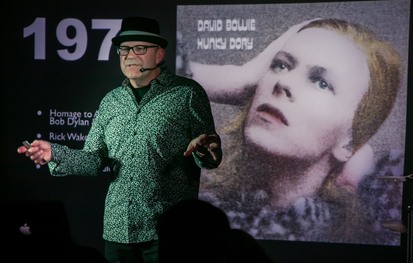 However, throughout his career, Bowie found a way to remain on top of the charts and ahead of the trends while staying true to his artistic calling. Ironically, many of his biggest hits were not necessarily considered his best songs. A true “album” artist, Bowie pioneered the concept album, then refined it repeatedly. And those concepts required flashy pop tunes side-by-side with deeper, richer epics. Some of Bowie’s best material served to anchor his album-length statements, but wouldn’t be the first chosen by radio or a club DJ to spin on a night out.

In tonight's session, “David Bowie’s Deep Tracks: Your Pretty Face Is Going To Hell,” Mulready will dig through Bowie’s extensive career, selecting his Deep Tracks: hidden gems, album tracks, epics and opuses that don’t usually pop up on someone’s Spotify playlist. Specially designed for the hard-core Bowie fanatic, casual fans will also discover what his followers have always known: if you like Bowie’s hits, you’re gonna love his really good songs. Along the way, we’ll have fun with trivia questions, audience interactivity and games.