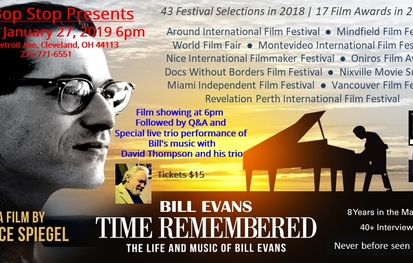 This evening's program dives into the life and music of Bill Evans featuring a film screening and live music!

At 6pm we will be screening “Time Remembered”, Bruce Spiegel’s acclaimed documentary about the life and music of Bill Evans. The film covers Bill’s entire life, from early childhood with his brother Harry, to his days with Miles Davis, and his seminal trios with Scott LaFaro and Paul Motian; Chuck Israels, Eddie Gomez and Marty Morell, and finally with Marc Johnson and Joe La Barbera. The film is filled with footage of Bill’s performances and interviews, and conversations with Bill’s friends and fellow musicians about their time with him. Also appearing in the film are Paul Motian, Jim Hall, Bob Brookmeyer, Orrin Keepnews, Warren Bernhardt, Tony Bennett, Bill Charlap, Jon Hendricks, Gary Peacock, Jack DeJohnette, Chuck Israels, Marty Morell, Marc Johnson, Joe La Barbera, Billy Taylor, Laurie Verchomin and others.

Bruce Spiegel was a producer/editor at CBS News/48 Hours for 25 years. During that time, he produced, edited and directed a number of films and documentaries. In 2002 he co-produced the award-winning TV documentary “9-11” which won both an Emmy (2002) and Peabody Award (2003). In 2012, alongside Wynton Marsalis and Hugh Masakela (South African music legend), Spiegel co-produced a CBS News/48 Hours TV documentary titled “Nelson Mandela: Father of a Nation”. He spent eight years making “Time Remembered”, traveling all over the US to create this remarkable film.

David Thompson has been performing and teaching for the past 30 years. He studied with George Shearing and Joanne Brackeen in New York, and with Don Haas in the SF Bay Area. He has composed film scores, and music for documentaries. For the past two years, he has been traveling throughout the US, presenting masterclasses on the life and music of Bill Evans, hosting showings of “Time Remembered”, Bruce Spiegel’s acclaimed documentary about the great jazz pianist. David also performs at jazz clubs and jazz festivals, and will be the guest artist at the 2019 University of Akron Jazz Festival in March of 2019. His solo CD, Introspect, was met with critical acclaim, including reviews by Marc Myers of The Wall Street Journal and Jazzwax.com, and Grammy award-winning writer Neil Tesser of Chicagojazz.com.