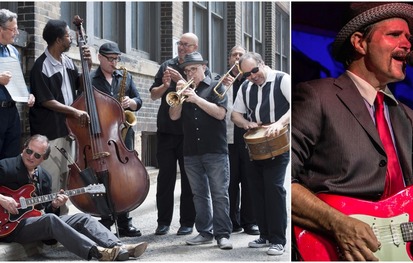 Tonight we present Blue Lunch with special guest, Billy Seward, for an electrifying evening of blues and soul!

Billy Seward's musical identity is the tale of 2 cities. Beginning in Chicago, with the West Side Blues masters Otis Rush and Magic Sam being the original inspirational source, then heading due south a days ride to Memphis, where the pulsing driving rhythm's and horn counterpoints of Hi Record's section drove singers like O.V Wright, Otis Clay, Syl Johnson and of course Al Green to the highest of high's. From the moment Billy heard Otis Clay singing in a small Chicago North side club, he was hooked and followed that musical trail down to Memphis.

At a time when rock blues guitar seems to define what blues is to many, Billy brings his voice to the front with a rich blend of deep soul and big city blues, paired with the crisp clear bite of the West side drenched blues guitar, a combination that can both excite and soothe but will always satisfy.