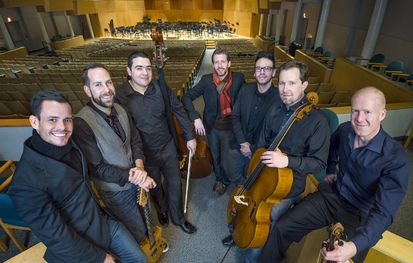 The Oblivion Project, formed in 2003, is dedicated to the exploration and performance of the over 3,000 Nuevo Tango works of Argentine tango master, Astor Piazzolla. For the past decade, musicians from all across the Americas have collaborated to explore and share the uncompromisingly unique, unequivocally attractive language of Piazzolla’s tangos. The group is blazing trails and carrying the sound-world of Piazzolla with them on their eighth tour of the Midwest and they have collaborated with artists such as Arturo Sandoval, Paquito D’Rivera, Randy Brecker, Dave and Chris Brubeck, Gil Shaham, Gabriela Montero, Diana Krall, Marcus Belgrave and Jamey Haddad.

The show will highlight the talents of the close-knit band of musical adventurers including graduates of the Cleveland Institute of Music, the New England Conservatory, Oberlin Conservatory and the Conservatory of Music in Cologne, Germany.

Following Saturday's performance, join The Oblivion Project for a Student Workshop! Students will partake in an instrumental masterclass, large ensemble and improvisation session at The Music Settlement's Ohio City Campus.