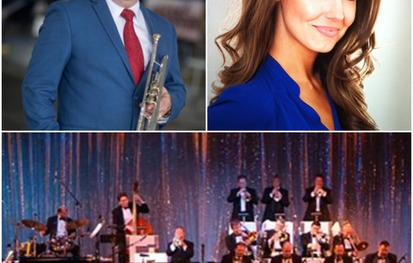 We are so happy that we were able to reschedule this show!

Akron's wildly popular big band returns to the Cleveland Bop Stop this season for a swingin' late autumn concert event featuring vocalist Britni Tozzi & the music of the legendary Peggy Lee! Trumpeter & bandleader David Banks has returned to the Northeast Ohio area after a twenty-year career in Las Vegas, Nevada. He performed in numerous top production shows – including six years with the “City Lights” Show at the Flamingo Hilton and the “Moulin Rouge” at the Las Vegas Hilton. He also worked with virtually every major entertainer in show business on the famous Las Vegas Strip and also was a member of the renowned Lou Elias Relief Orchestra. He was also a member of the Nevada Symphony Orchestra, The Las Vegas Philharmonic, and the Nevada Chamber Orchestra.

Since his return to the area, David has been on the faculty of Walsh Jesuit High School and is in his 19th year teaching music and drama. He is in demand as a lead trumpeter in Northeast Ohio, performing regularly with the Cleveland Jazz Orchestra, having recorded CDs with them as well as CDs for the Paul Ferguson Orchestra, Ernie Krivda, and Helen Welch.

Dave has served as Lead Trumpet in several shows at Playhouse Square, E.J. Thomas Hall, The Carousel Dinner Theatre and Porthouse Theater performing for professional productions of “Anything Goes,” “Beauty and the Beast,” “Brigadoon,” “Chicago,” “Parade,” “The Producers,” “Ragtime,” “42nd Street,” “Guys and Dolls,” “Thoroughly Modern Millie,” “Hairspray,” “The Drowsy Chaperone,” “Sweet Charity,” “West Side Story,” “Swing,” and “All Shook Up” to name a few.

Britni Tozzi is a Chicago based actor / singer, represented by Paonessa Talent Agency. Currently, she can be seen on television with clients such as Galaxie, CLR, and Making Healthy Choices.

Britni most recently performed in the Jeff Recommended production of The Children’s Hour with Pride Films & Plays. She graduated valedictorian from Columbia College Chicago, and is the Founder and President of Global Empathy Now, a non-profit organization benefiting at-risk children in Africa.