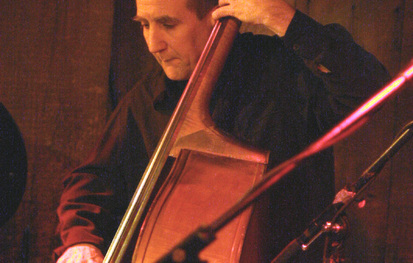 Tim has had many influential teachers, including Dennis Irwin, Michael Moore, Andy McKee, and Martin Wind. In addition, he has studied composition with pianist/composer Ron Thomas.

A native of Cleveland, Tim lived and worked in New Jersey from June, 1986 through April, 2016. As a free-lance bassist he had the opportunity to work with and accompany many artists including Orrin Evans, Grant Stewart, Bob DeVos, Rick Germanson, Vic Juris, Joanna Pascale, Oscar Brown Jr., Paul Jost, Barry Miles, Rebecca Paris, Jim Ridl, Gina Roche, Natasha Roth, and Ron Thomas. During this time he was also a member of The George Mesterhazy Trio, The Antfarm Quartet and Trio Music (with drummer Bob Shomo and pianist Jim Ridl).

A love of composing combined with the knowledge gained from all these experiences served as a catalyst and inspired Tim to begin leading his own group.His ensembles have performed at numerous venues and festivals in New Jersey and Pennsylvania.

Many of his original compositions can be heard on 2 self-produced CDs- 'P.M. - The Tim Lekan Trio with special guest Gina Roche' on Encounter Records (1997), and The Tim Lekan Quintet - 'Short Stories' (2014).

Tim was also a member of the South Jersey Jazz Society Board of Directors for several years, and he served as Artistic Director for 4 years. As an organizer and supporter of the local music scene in South Jersey, Tim created and organized many musical events over the last several years. He hosted a weekly jazz jam session each summer, a Monday Night Duo Concert Series, Young Musicians Night, and The Tuesday Night Jazz Series.

Tim currently resides in Cleveland, Ohio, where he maintains a busy schedule working both as a freelance bassist, composer and special education aide in the North Olmsted School District.