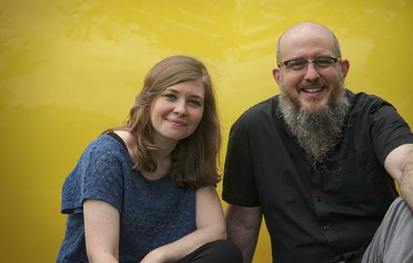 Taking its name from a beloved American folk song, Wayfaring is a duo project between bassist/vocalist Katie Ernst and clarinetist James Falzone. What began as a casual meeting between like-minded players has formed into a collective of unusual nuance and depth, drawing on source material from the jazz tradition, hymns, folk songs, and original compositions from Ernst and Falzone. Wayfaring was featured at the 2016 Hyde Park Jazz Festival in Chicago, the 2017 Earshot Jazz Festival in Seattle, and released their debut recording, "I Move, You Move," in Fall 2017 on the Allos Documents labe to much critical acclaim.

“One of the most austerely beautiful recordings of the year sounds very much like a balm for troubled times. Elements of jazz, folk, pop, blues and other genres course through this work, but it’s the long-lined lyricism and pervasive warmth of the music-making that leave the deepest and most lasting impression. ”
— Howard Reich, The Chicago Tribune

“Modern jazz history is rife with strong duos, but Wayfaring stands out by channeling ideas from American folk tradition or the church into music that extends well beyond the language of jazz. A stunning record.”
— Peter Margasak, The Chicago Reader