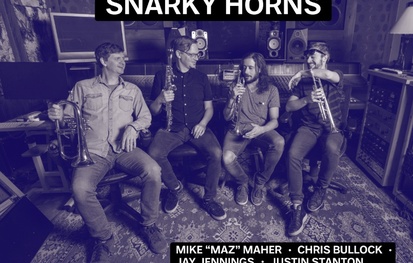 The Snarky Horns are a dynamic and virtuosic group of instrumentalists that bring their collective experience as long standing members of the three-time GRAMMY Award-winning juggernaut Snarky Puppy together with their broad careers as solo artists and sidemen to explore the boundaries of a horn section’s potential.

The genesis of the Snarky Horns starts in Denton, Texas at the University of North Texas. While there, each of the members had tenures in the GRAMMY Award-winning One O’Clock Lab Band, performing with the group around the globe and recording on several of the band’s albums. It was also while in Texas that the Horns started performing with Snarky Puppy while also maintaining busy freelance schedules in the Dallas-Fort Worth area. In the time since then, each member of the Snarky Horns has gone on to: record twelve albums, earn three GRAMMY Awards, tour extensively, and garner numerous accolades from publications worldwide with Snarky Puppy; maintain vibrant and diverse careers as sidemen, performing and recording with the likes of David Crosby, Donald Fagen, Lalah Hathaway, Kirk Franklin, Soulive, Chris Thile, and Eric Harland, to name a few; and cultivate their own, distinct solo projects, ranging from styles as diverse as Wendy Carlos-inspired neo-Baroque, West Coast bebop, progressive singer-songwriting, and hip hop tinged with elements of modern jazz and electronic music.

As a co-led group, the Snarky Horns’ sound is a synthesis of each member’s influences. In this unique context, listeners can expect to hear brand new repertoire composed specifically for the group as well as reworkings of their compositional contributions to other groups such as Snarky Puppy or their respective solo projects. In addition, the Horns are constantly creating fresh interpretations of music by their biggest influences, filtering important traditions of music from the past through their singular sound as a cohesive unit.

The Snarky Horns are also committed to arts education. Having given clinics throughout North America and Europe - both with Snarky Puppy and as individuals - the Horns have worked with all skill levels of students in every imaginable setting - from conservatories to Boys and Girls Clubs. Therefore, they value the importance of approaching each educational situation as special, each with its own set of challenges and opportunities to make a positive impact on students.