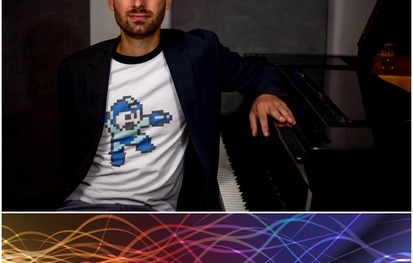 88bit is the alter ego of Cleveland-based pianist, Rob Kovacs, where he performs note-for-note piano arrangements of classic video game soundtracks from the original Nintendo Entertainment System. Kovacs’ performances are unique in that they recreate early electronic music that was never intended to be performed by humans, stretching the limits of what’s capable on piano.

Kovacs has been performing as 88bit since 2018 and has played at events such as the PAX South, Super MAGFest, the Mensa National Gathering, NeoSonic Fest, and Classic Game Fest to name a few.

He has been interviewed about 88bit by NPR’s “Sound of Applause” (WCPN Cleveland), NPR’s “Shuffle” (WKSU Kent), and for www.blownspeakers.com.

Outside of 88bit, Kovacs is an award-winning composer, pianist and singer/songwriter. He is the first person to perform the solo version of Steve Reich’s Piano Phase by simultaneously playing both piano parts on two pianos. Kovacs also performs as a solo singer/songwriter as well as fronts the indie-rock bands Math + Logic and Return of Simple, the latter of which plays regionally and who’s music has been played on satellite, college and Pandora radio. He has performed and recorded with other artists including Mark Mothersbaugh, Parson James, Sandra Bernhard, Natalie Weiss, Rachel Potter, Grace Love, Margot Bingham, and Herzog.

The Grammy Award winning Cleveland Chamber Symphony (CCS) is proud to present the fifth annual “NEOSonicFest”, a festival of new music focused on recent compositions from Northeast Ohio and beyond. CCS will act as the NEOSonicFest organizer and host ensemble.

NEOSonicFest’s innovative spirit will showcase the wealth of contemporary music composers and performers in Northeast Ohio running April 6 – April 15, 2018. After four successful years the festival will continue to solidify and expand the role of Northeast Ohio in the new music and wider contemporary cultural world wide. Festival focus will be on the tremendous new music resources we are fortunate to have in Northeast Ohio. By doing so we can promote new music and provide outlets for composers and musicians alike to further the mission of Cleveland Chamber Symphony to create music that dares to explore!

This event is FREE but there is a $10 suggested donation.