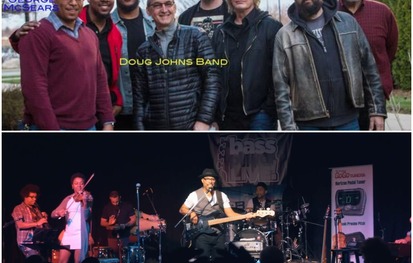 SUPERFUNKYBASSMUSIC is the best way to describe what Doug Johns brings to the stage. With four solo records to date, Doug Johns hosted his his CD release for "VODKA IN THE WOODPILE" at BOP STOP and we were enamored with his playing so we needed to have him back!

BIO: Musician Doug Johns knows it’s all about the rhythm. After four solo recordings (Doug Johns, Pocket Fulla Nasty, Stank, and Blomp!), Doug is ready to invite listeners inside for his most autobiographical work to date, Vodka in the Woodpile.

Released on April 15, 2016, Vodka in the Woodpile reveals an unexpected new sound for the Cleveland bassist as he shares a sense of his life’s influences beyond the funk-bass standard. Doug kicks off the recording with a banjo in his hands on “Old Woman Creek,” salutes Rock and Roll in an energetic tribute to “Free Ride,” and still doesn’t miss a beat with his classic, full band funky sound in tracks like “Tricerafunk.”

Vodka in the Woodpile features performances with many of Doug Johns’ now-signature artists, including Jordan Simmons on Drums, Kenny Anderson and Joe Miller on Horns, and Oz Noy on Guitar. A special appearance from drummer icon Dennis Chambers and assistant production by Denali are Vodkahighlights not to be missed.

Doug Johns has long been known for his deep groove and his open, sharing approach to music and life. Bass Player Magazine on Johns: “One of the most credit–deserving bass virtuosos in America…it’s his inventiveness that’s consistently compelling.”

Regarded by his peers as a latin jazz institution. Oskar Cartaya is on the fore front of the music industry today! In a career that spans over 30 years he has played, written, arranged and produced for such names as Willie Colon, Hector Lavoe, Herb Albert, Jennifer Lopez, Tito Puente, Steve Winwood, Arturo Sandoval, Spyro Gyra, Israel Houghton, Jonathan Butler, and countless more. With the ability to peak the interest of the young and young at heart. He flawlessly and with a maticulous touch blends traditional latin rythms, with the modern. Having received critical aclaim on his first project, "My Music, My Friends, My Time" he follows up with his sophmore album, "Bajo Mundo". A must for all music enthusiast. With great responsibilty, standing on the shoulders of the Latin legends before him. Oskar continues in that legacy, and now carries the torch passed on to him.

Oskar's latest project, The Ricannection, bridges his Puerto Rican heritage with musical influences from around the world. "The Ricannection" is a blending of musical styles, cultures and whole new attitude to captivate and entertain the audience. With their energy, passion and very own swag, The Ricannection takes what is considered to be complex music and makes it feel natural and enjoyable. Experience it, and judge for yourself.